-Fed Chair Powell Testifies That Recession Is “Certainly a Possibility”

-Is An Increase In Jobless Claims Ahead? 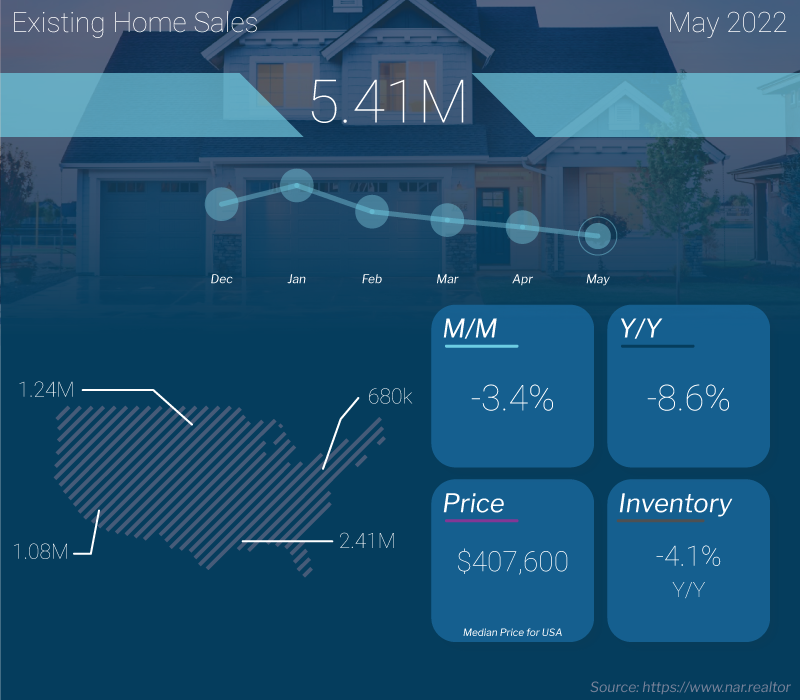 Existing Home Sales, which measure closings on existing homes, showed that sales were down 3.4% in May at a 5.41 million-unit annualized pace. This data likely reflects people shopping for homes in March and April, which included much of the rise in rates we’ve seen this year – but not all of it. On a year over year basis, sales were down 8.6%, though this level is still quite strong considering higher rates, higher home prices and tight inventory.

What’s the bottom line? There were 1.16 million homes available for sale at the end of May, which is 12.6% higher than April’s inventory level. However, this equates to just a 2.6 months’ supply of homes. Six months is considered a balanced market, so this data speaks to the ongoing imbalance of supply and demand, which should continue to be supportive of home prices. In addition, 88% of homes that sold in May were on the market for less than one month, which should also be supportive of home prices.

And speaking of prices, the median home price was reported at $407,600, which is up almost 15% year over year. Remember that the median home price is not the same as appreciation. It simply means half the homes sold were above that price and half were below it. This figure continues to be skewed by the mix of sales, as sales on the lower end were down sharply on an annual basis, while sales of homes above $500,000 were much higher. 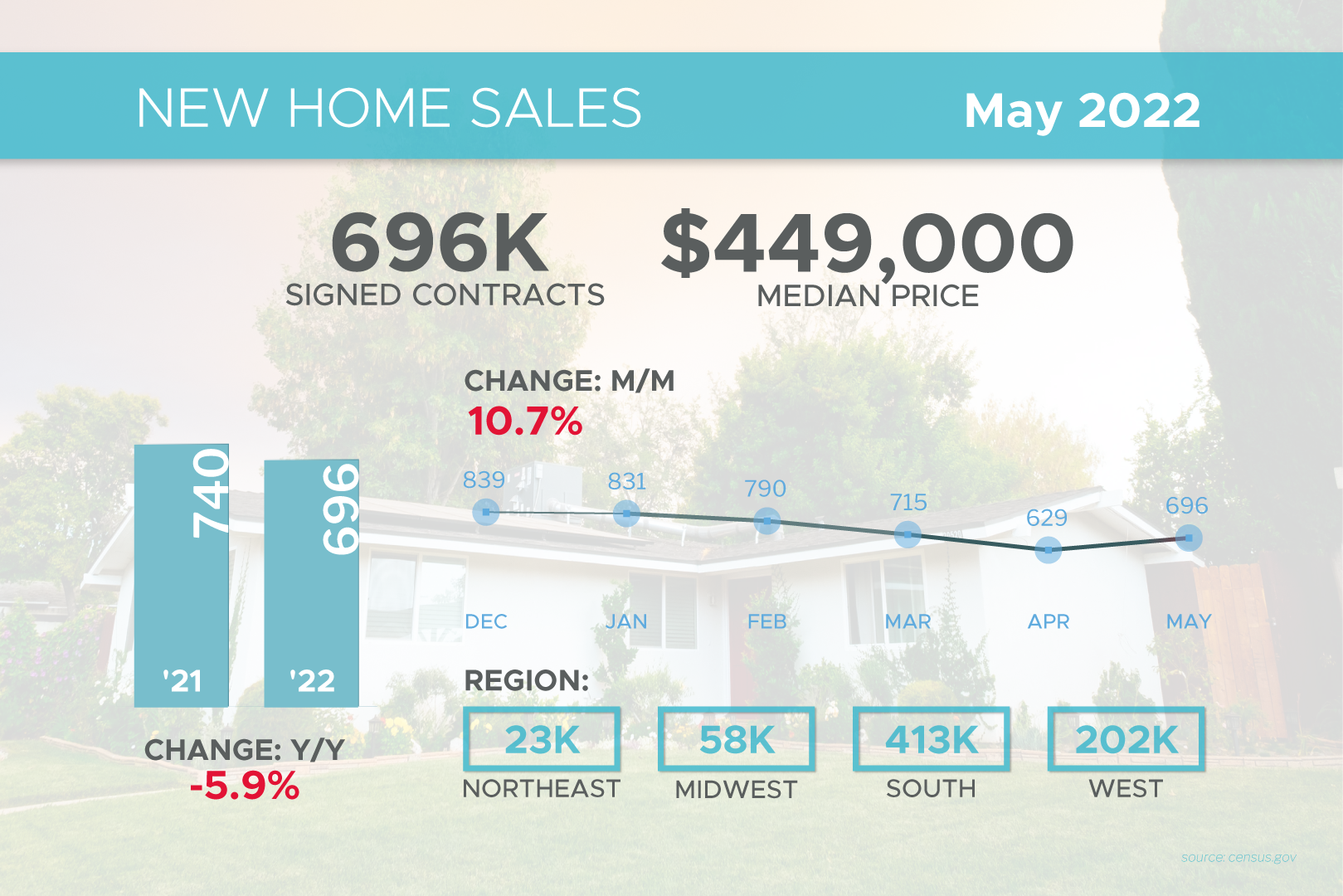 New Home Sales, which measure signed contracts on new homes, were up 10.7% in May to a 696,000-unit annualized pace. Not only was this above expectations, but the report is stronger than it appears because there was a positive revision to April’s data. When factoring that in, sales were up 18% from the initially reported number. Year over year, sales fell 5.9%.

What’s the bottom line? There were 444,000 homes for sale at the end of May, representing a 7.7 months’ supply. However, only 37,000 or about 6% were actually completed. The rest were either not started or under construction, which speaks to the delays and supply chain constraints builders have faced.

Fed Chair Powell Testifies That Recession Is “Certainly a Possibility”

What’s the bottom line? On the topic of recession fears, Powell changed his tune regarding a “soft landing,” which means the Fed can slowdown or tighten the economy in their attempt to bring inflation under control while avoiding a recession. He acknowledged that pulling off a soft landing would be “very challenging” and that a recession is “certainly a possibility.”

CoreLogic’s Single-family Rent Index showed that rents experienced their thirteenth consecutive month of record-breaking annual gains in April. Single-family rent prices were up by 14% year over year, with pricing pressure coming from a shortage of rental properties on the market. April’s rent price growth was more than double the increase that was reported in April 2021 and more than six times higher than the growth seen in April 2020.

What’s the bottom line? Rental prices for detached homes grew more rapidly in 2021 than they did for attached homes, given buyers’ desire for more space following the pandemic. However, the lack of inventory caused the gap between attached and detached property rental growth to begin narrowing last fall. As of the latest report, attached rental property prices grew by 13.7% year over year in April, versus the 13.5% increase for detached homes.

Is An Increase In Jobless Claims Ahead? 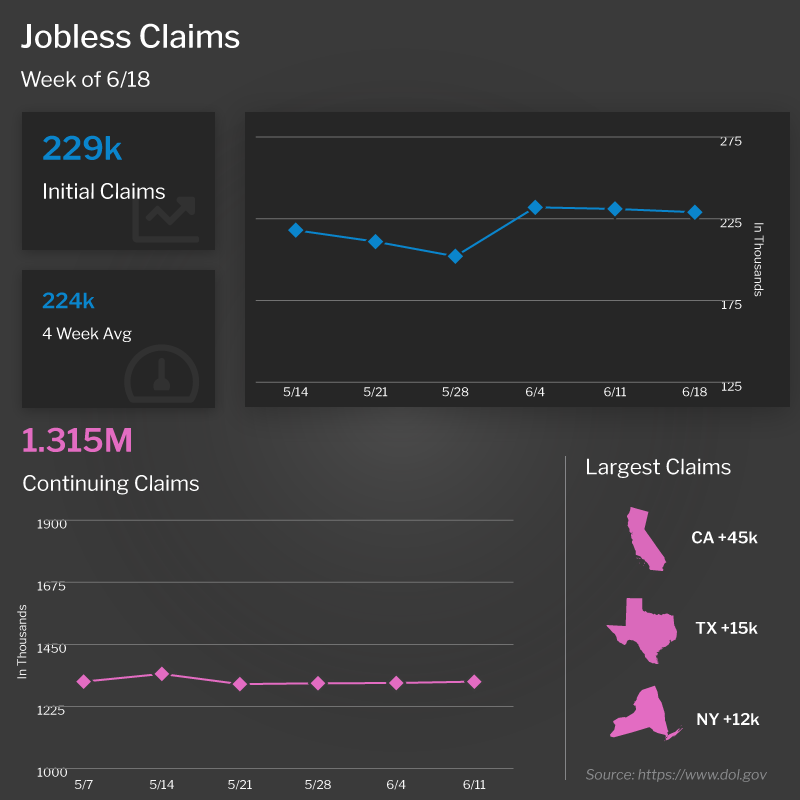 Initial Jobless Claims fell by 2,000 in the latest week, as 229,000 people filed for unemployment benefits for the first time. Continuing Claims, which measure people who continue to receive benefits after their initial claim is filed, increased by 5,000 to 1.315 million, which is just above a 50-year low.

What’s the bottom line? While Initial Jobless Claims decreased in the latest week, the 4-week average is at the highest level since late January. This could be an early sign that companies are starting to not only pause hiring but are also beginning to lay people off due to slowdowns. We have heard announcements of significant layoffs from several public companies, which will start to show up in these numbers, so this is something important to monitor in the weeks ahead.

These Berry Ice Pops courtesy of Southern Living make for a healthy and delicious red, white and blue Fourth of July treat.

Blend 2 cups strawberries (hulled and quartered), 2 tablespoons sugar and 1 tablespoon each of lemon and lime juices in a blender until smooth. Pour mixture through a fine mesh strainer into a bowl. Add 3 tablespoons of strawberry mixture into each of 8 4-ounce ice-pop molds. Freeze until firm, approximately 30 minutes.

In a medium bowl, stir together 1/2 cup plain yogurt, 3 tablespoons heavy cream, 2 tablespoons sugar and 1 tablespoon each of lemon and lime juices. Remove molds from freezer and top each with 2 tablespoons of the yogurt mixture. Freeze until firm, approximately another 30 minutes.

Blend 2 cups blueberries, 2 tablespoons sugar, and 1 tablespoon each of lemon and lime juices in a blender until smooth. Pour mixture through a fine mesh sieve into a bowl. Remove molds from freezer and top each with 3 tablespoons of the blueberry mixture.

Insert popsicle sticks into molds. Freeze until solid, approximately 6 hours, and then enjoy!

More housing news is ahead, beginning with Monday’s release of Pending Home Sales for May. Home price appreciation data for April follows on Tuesday when the Case-Shiller Home Price Index and the Federal Housing Finance Agency (FHFA) House Price Index are reported.

Wednesday brings the final reading on first quarter Gross Domestic Product (GDP). Remember that the technical definition of a recession is two consecutive quarters of negative economic growth as measured by GDP. Given that the second estimate for first quarter GDP was -1.5%, the final estimate will be important to monitor.

Thursday brings the latest Jobless Claims data, as usual, along with crucial inflation numbers for May via the Fed’s favored measure, Personal Consumption Expenditures.

Be sure to download Screenleap and run the app before you begin! Quick Guide