A Fed rate hike, hot wholesale inflation, weakening builder confidence and signs of economic slowdown led to a volatile week in the markets. Here are the top headlines:

The Fed was expected to hike its benchmark Fed Funds Rate by 50 basis points at its meeting last week, but instead acted more aggressively with a 75 basis point hike, due in large part to the hotter than expected Consumer Price Index reading that was reported on June 10. Note that the Fed Funds Rate is the interest rate for overnight borrowing for banks and it is not the same as mortgage rates.

The main tool the Fed uses to curb inflation is hiking its benchmark Fed Funds Rate, so counterintuitively Fed rate hikes can be good for mortgage rates if they’re perceived to curb inflation. The Fed also noted that depending on the data, they will hike another 50 or 75 basis points at their meeting on July 26-27.

What’s the bottom line? Central bankers around the world are scrambling to put the inflation genie back in the bottle, as we have seen hikes by the Bank of England, Taiwan, United Arab Emirates, Qatar, Bahrain, Brazil and a surprise 50 basis point hike by the Swiss Bank, which led to market volatility last Thursday. It will be important to see if investors and the markets believe the Fed and other central banks can get a handle on inflation, as this will play a crucial role in the direction of Mortgage Bonds and mortgage rates this year.

What’s the bottom line? While the markets reacted favorably to the slight decline in wholesale inflation, producer inflation remains elevated. This can lead to hotter consumer inflation levels, as producers pass those higher costs along to consumers.

In addition, 28% of small business owners reported that inflation was their single most important problem in operating their business in May, per the National Federation of Independent Business Small Business Optimism Index. Owners expecting better business conditions over the next six months also fell four points to a net negative 54%, which is the lowest level recorded in the survey’s 48-year history. 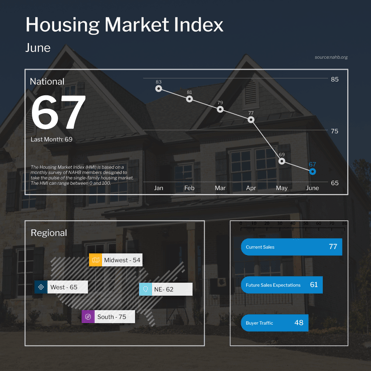 The National Association of Home Builders Housing Market Index, which is a near real-time read on builder confidence, fell 2 points to 67 in June, as expected. Looking at the components of the index, current sales conditions fell 1 point to 77, future sales expectations were down 2 points to 61 and buyer traffic declined 5 points to 48.

What’s the bottom line? Any reading above 50 on this index, which runs from 0 to 100, signals expansion while readings below 50 signal contraction. Overall, while these figures have declined significantly from last year, most are still at pretty strong levels. A big concern is that traffic has dipped beneath 50, which signals contraction.

NAHB’s chief economist, Robert Dietz, noted that, “Residential construction material costs are up 19% year-over-year with cost increases for a variety of building inputs, except for lumber.” He also said that they are seeing less demand due to the increase in mortgage rates, which is reflected in the decline of buyer traffic as noted above.

Despite Slowing Housing Starts, Glimmer of Hope for Home Completions 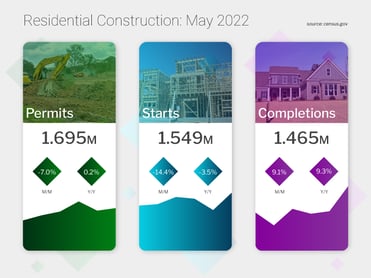 Housing Starts, which measure the start of construction on homes, plunged 14.4% from April to May. Starts for single-family homes, which are the most important because they are in such high demand among buyers, were also down 9.2%. Building Permits, which are a good forward-looking indicator for Housing Starts, were down 7% while single-family permits also fell by a large amount, dropping 5.5%.

What’s the bottom line? On a positive note, we finally saw some more homes completed in May, which will add to more inventory in the short term. Housing completions were up 9.1% from April to May, with single-family units completed up 2.8% last month.

What to Look for in Jobless Claims Data 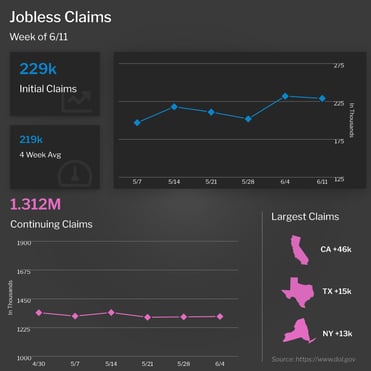 The number of people filing for unemployment benefits for the first time fell by 3,000 in the latest week, as 229,000 Initial Jobless Claims were reported. Continuing Claims, which measure people who continue to receive benefits after their initial claim is filed, increased by 3,000 to 1.312 million, remaining near a 50-year low.

What’s the bottom line? While Initial Jobless Claims decreased in the latest week, the 4-week average is at the highest level since late January. This could be an early sign that companies are starting to not only pause hiring but are also beginning to lay people off due to slowdowns. We have heard announcements of significant layoffs from several public companies, which will start to show up in these numbers, so this is something important to monitor in the weeks ahead.

Recent reports offer more signals that the economy is slowing. In the manufacturing sector, there were negative readings (which signal contraction) reported for the New York and Philadelphia regions via June’s Empire State and Philadelphia Fed Indexes. Retail Sales also fell 0.3% in May, while April’s data was also revised lower. This comes as higher food and gas prices are hurting consumers’ budgets for discretionary spending.

In addition, the nation’s personal savings rate, which soared during the early months of the pandemic, has now fallen back to below its pre-pandemic levels. The savings rate was 7.8% in January 2020, rose to 33.8% in April 2020, and now has dropped back to 4.4% in April 2022. The 4.4% rate is the lowest recorded in the United States since September 2008 and is another recessionary indicator.