Headlines showed that April brought moderating inflation and slower home sales, but that’s not the whole story. Here’s what you need to know:

Inflation Moderates in April, But Don’t Be Fooled

The Fed’s favorite measure of inflation, Personal Consumption Expenditures (PCE), showed that headline inflation rose 0.2% in April, which was cooler than estimates of 0.3%. This caused the year over year reading to decrease from 6.6% to 6.3%, which was slightly beneath expectations of 6.4%. Core PCE, which strips out volatile food and energy prices and is the Fed’s real focus, met estimates with a 0.3% rise. Year over year, Core PCE decreased from 5.2% to 4.9%.

What’s the bottom line? While the PCE report showed that inflation moderated in April, we can’t be fooled by peak inflation just yet. It’s too early to call if inflation has truly peaked because China will be letting up on their lockdowns soon, which should cause more energy consumption.

In addition, it’s important to note that annual inflation is calculated on a rolling 12-month basis. This means that the total of the past 12 monthly inflation readings will give us the year over year rate of inflation, so for example last week’s reading for April replaced the data from April 2021 in the calculation. While we could see inflation moderate further over the next two months, given that those readings from 2021 are tough comparatively, the comparisons from last summer drop to low levels. So, we could see inflation start to increase again in the summer months, before seeing consistent drops after September. 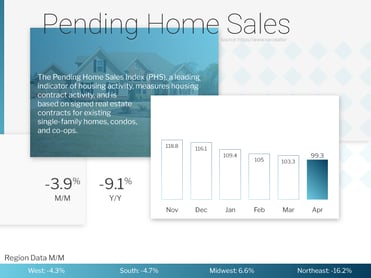 Pending Home Sales, which measure signed contracts on existing homes, fell 3.9% in April, coming in weaker than the 2% decline that was expected. Sales were also down 9.1% year over year. There is no doubt that higher interest rates are impacting demand, but demand is still hanging in there considering the increase in prices and lack of inventory.

What’s the bottom line? The last reading on existing home inventory showed that there were 1.03 million homes for sale, yet there were only 409,000 active listings, meaning only 40% of the homes counted as inventory were actually available for sale. Why the disparity? Existing inventory also includes homes under contract that have not yet been sold. This data speaks to the ongoing imbalance in actual supply versus demand. 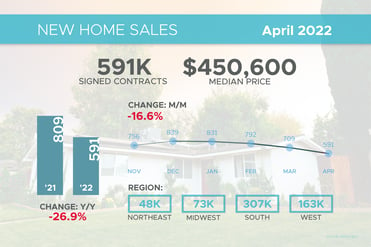 New Home Sales, which measure signed contracts on new homes, were down 17% from March to April to a 591,000-unit annualized pace. While this was in line with expectations, the report was actually weaker than it appears because there was a negative revision to March’s data. When factoring that in, sales were down 22% from the initially reported number. Year over year, sales fell nearly 27%.

What’s the bottom line? While higher rates and home prices are having an impact on new home sales, uncertainty is as well. It normally takes six months to build a new home, but today it’s much longer and there is little certainty on completion times. People rarely make moving plans years in advance and with rates moving higher and fears of a recession, many are not comfortable purchasing a new home that is not completed and does not have a solid finish date.

And to that point, while there were 444,000 homes for sale at the end of April, only 38,000 or 6% were actually completed. The rest were either not started or under construction. 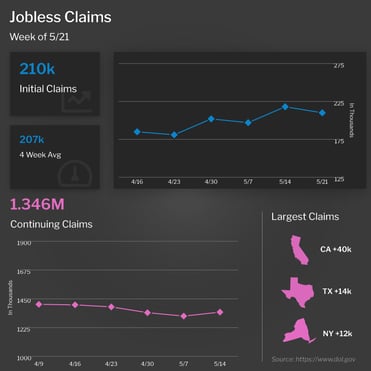 Initial Jobless Claims decreased by 8,000 in the latest week, as 210,000 people filed for unemployment benefits for the first time. Continuing Claims, which measure people who continue to receive benefits after their initial claim is filed, increased 31,000 to 1.346 million. This is coming off the lowest number of Continuing Claims since December 1969.

What’s the bottom line? While Initial Jobless Claims decreased slightly in the latest week, the 4-week average is at the highest level since February. Should the upward trajectory continue, it could be an early sign that unemployment will begin to rise, which is another recession indicator.

The manufacturing sector is showing signs of a slowdown, both globally and here at home. After weak readings from the Empire State Index (which measures manufacturing in the New York region) and the Philadelphia Fed Index, the Richmond Fed manufacturing index was also significantly lower than expectations.

In addition, the second reading on first quarter GDP came in at -1.5%, which was a decline from the -1.4% we saw in the initial reading. It will be important to see how second quarter GDP performs, as a textbook definition of a recession is two consecutive quarters of negative GDP.

What’s the bottom line? The Fed has been hiking its benchmark Fed Funds Rate to curb inflation, with more hikes expected at their June and July meetings. Note that the Fed Funds Rate is the overnight borrowing rate for banks and it is not the same as mortgage rates. However, there has been speculation regarding whether the Fed will have the resolve to keep hiking with deteriorating economic conditions. This will be an important development to monitor in the coming months.