Did someone say low inventories? 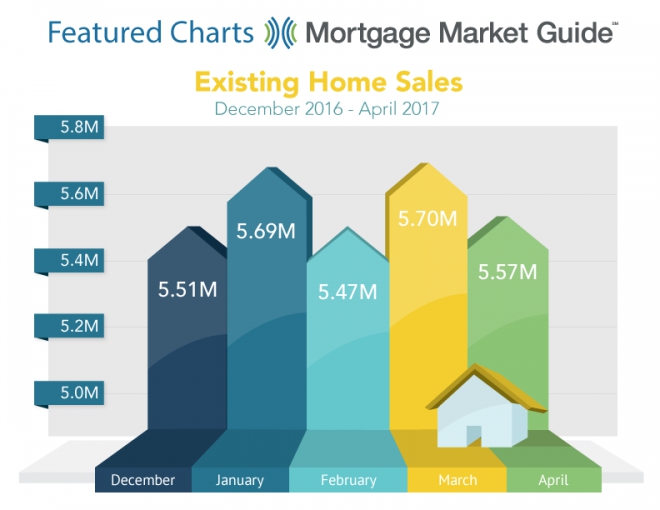 Overview: The National Association of REALTORS® reported on Wednesday that Existing Home Sales in April fell 2.3% from March to an annual rate of 5.57 million units. This was below the 5.65 million expected. The sales slide was mainly due to low inventories of homes for sale. Inventories are running at a 4.2 month supply, below the six-month supply that is seen as normal. The median sales price rose 6%, marking 62 straight months of price increases.

No. 2 home improvement chain Lowe's missed on both revenues and earnings per share, which is in stark contrast to rival Home Depot's impressive earnings numbers last week. Lowe's has been trying to cater to the do-it-yourself customer, as opposed to rival Home Depot's focus on high-spending general contractors, which has helped to benefit more from the solid housing market. Shares of Lowe's were down 4% in today's trading session.

Commentary at the close:  Mortgage Bonds traded near unchanged up until the 2:00 p.m. ET release of the Fed minutes where they revealed a more gradual approach to trimming its massive balance. The Fed also wants to make sure that economic weakness in the first quarter has not spilled over into the second quarter. In economic news, April Existing Home Sales were weaker than expected. The Fannie Mae 30-yr 3.5% coupon closed at 103.06, up 22bp after hitting a session low of 102.75. Stocks also were giddy over the Fed's balance sheet news. The Dow gained 74.51 points to 21,012.42, the S&P 500 was up 5.97 points to 2,404.39 to a record close, while the NASDAQ gained 24.31 points to end at 6,163.02. WTI oil settled at $51.36/barrel, -$0.11. 10-yr T Note yield 2.25%. Tomorrow's economic data is limited to Weekly Initial Jobless Claims.