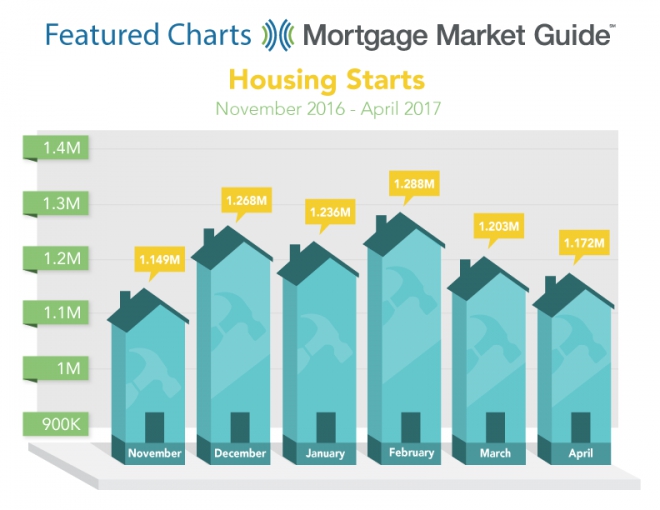 The housing market received a blow today after newly constructed housing fell to a six-month low, due in part to a plunge in rental construction. April Housing Starts fell 2.6% from March to an annual rate of 1.172 million units, below the 1.26 million expected. Single-family construction, which makes up a large portion of the residential market, rose 0.4% to an annual pace of 835,000 units. The rental construction sector plunged 9.2% and have declined four straight months, which could suggest that the rental markets is beginning to peak.

Government sponsored entity and secondary mortgage market provider Fannie Mae released its Economic & Strategic Housing Outlook for May on Tuesday. The report showed that housing was a bright spot during the first quarter, and home sales performed well going into the spring season, thanks to solid labor market conditions and a recent retreat in mortgage rates. On the economic front, Fannie Mae says that current data suggests that consumer spending growth will pick up in the second quarter, while businesses will likely increase production in an effort to rebuild inventories.

Mortgage modification rates declined in the past week after hitting an 18-month high back in January. Fannie Mae and Freddie Mac recently cut the rate to modify a mortgage from 4.25% to 4.125%. The modification program is designed to help those borrowers who are ineligible for the Home Affordable Modification Program. The decrease came after mortgage rates recently declined.