March brought a slowdown in home sales and construction of single-family homes. Plus, does news from the World Bank and IMF signal that a recession is ahead? 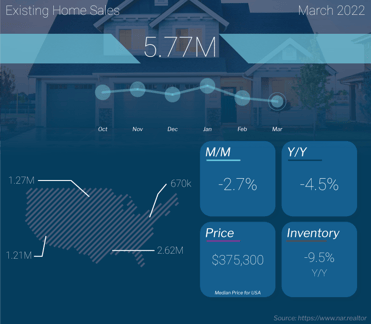 Existing Home Sales, which measure closings on existing homes, showed that sales were down 2.7% in March at a 5.77 million unit annualized pace. Note that this likely measured activity in January and February when rates were rising but not at the levels they are today. On a year over year basis, sales were only down 4.5%, which is still quite strong considering higher rates, higher home prices and tight inventory.

And speaking of inventory, there were 950,000 homes for sale at the end of March. While this is an increase of almost 12% from February, inventory is still 9.5% lower than it was in March of last year. There is now a 2 months’ supply of homes available for sale, which is up from 1.7 months at the end of February. However, a 6 months’ supply of homes reflects a balanced market.

Homes were only on the market for 17 days in March, down from 18 in February. In addition, 87% of homes that sold were on the market for less than one month. This should continue to be supportive of home prices.

The median home price was reported at $357,300, which is up 15% year over year. Remember that the median home price is not the same as appreciation. It simply means half the homes sold were above that price and half were below it. This figure continues to be skewed by the mix of sales, as sales on the lower end are down sharply, while sales above $500,000 are much higher.

First-time homebuyers accounted for 30% of sales, which is a nice move higher from 29% in the previous report and 27% two months ago. Cash buyers increased from 25% to 28%, while investors purchased 18% of homes, down from 19%. Foreclosures and short sales accounted for less than 1% of all transactions.

Housing Starts, which measure the start of construction on homes, increased 0.3% in March at an annualized rate of 1.79 million units. Year over year, Housing Starts were up 3.9%.

However, starts for single-family homes, which are the most important because they are in such high demand among buyers, decreased by 1.7% and they were down 4.4% from March of last year.

Building Permits, which are a good forward-looking indicator for Housing Starts, rose by 0.4% last month and they were up 6.7% on a year over year basis. Yet there were declines here as well for single-family permits, which fell 4.8% monthly and 3.9% year over year.

Speaking to the backlog of homes builders are contending with, single-family units authorized but not yet started were up almost 15% year over year, while single-family completions were down 6.4% monthly and 3.3% annually.

While the media often looks at these numbers and reports doom and gloom is ahead for housing, it's important to remember that there are two sides to the coin. From an economic growth standpoint, tight inventory and fewer home sales are a negative, but when looking at housing as an investment, tight inventory is supportive of home prices. 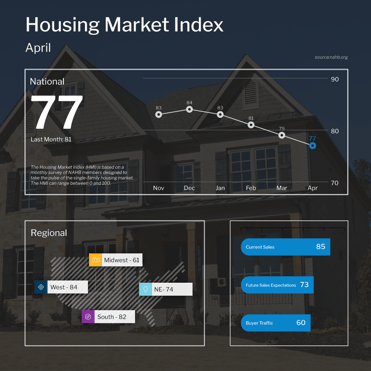 Builder confidence fell for the fourth straight month, as the National Association of Home Builders Housing Market Index declined 2 points to 77 in April.

Looking at the components of the index, current sales conditions fell 2 points to 85, which is still very strong, while buyer traffic fell 6 points to 60. Future sales expectations rose 3 points to 73, following the 10-point drop in March.

It should be noted, however, that a reading above 50 on this index, which runs from 0 to 100, still signals expansion.

So, while some of these figures are contracting, they are still at strong levels overall.

The number of people filing for unemployment benefits for the first time declined by 2,000 in the latest week, as 184,000 Initial Jobless Claims were filed.

Continuing Claims, which measure people who continue to receive benefits after their initial claim is filed, fell by 58,000 to 1.417 million. This is the lowest number of Continuing Claims since 1970.

The story here remains the same: The labor market remains tight as employers are holding on to their workers and firing less.

Wednesday’s 20-year Bond auction was met with strong demand. The bid to cover of 2.8 was higher than the one-year average of 2.4. Direct and indirect bidders took 91.2% of the auction compared to 81.0% in the previous 12. While Mortgage Bonds responded well to this news Wednesday, they gave back much of their gains Thursday morning.

Meanwhile, the World Bank slashed their global growth forecast from 4.1% to 3.2%. The largest single factor in the reduced growth forecast was a projected economic contraction of 4.1% across Europe and Central Asia. Other factors included higher food and fuel costs, and the Russia/Ukraine war. The International Monetary Fund (IMF) also said that they expect global economic growth to slow and feel the outlook has deteriorated. These are just additional indicators pointing to a global slowdown and increases the chances of a recession.