Inflation and housing data dominated the headlines, with these key stories:

The Fed’s favorite measure of inflation, Personal Consumption Expenditures (PCE), showed that headline inflation rose 0.9% in March, which was higher than estimates of 0.5%. This caused the year over year reading to increase from 6.3% to 6.6%, which is a 40-year high! Core PCE, which strips out volatile food and energy prices, was up 0.3%, while year over year the index actually decreased from 5.3% to 5.2%.

What’s the bottom line? Not only does inflation lead to higher costs of goods, but it is also the arch enemy of fixed investments like Mortgage Bonds because it erodes the buying power of a Bond’s fixed rate of return. If inflation is rising, investors demand a rate of return to combat the faster pace of erosion due to inflation, causing interest rates to rise as we’ve seen this year. This week’s Fed meeting will be crucial as investors will be closely watching what actions the Fed will take to address rising inflation.

The Case-Shiller Home Price Index, which is considered the “gold standard” for appreciation, showed home prices rose 1.7% in February and 19.8% year over year. This annual reading is up from the 19.1% gain seen in the previous report.

The Federal Housing Finance Agency (FHFA) also released their House Price Index. This report measures home price appreciation on single-family homes with conforming loan amounts, which means it most likely represents lower-priced homes where supply has been tight and demand strong. Home prices rose 2.1% in February and were up 19.4% year over year, which is an increase from the 18.2% rise reported for January.

What’s the bottom line? Despite ongoing reports from the media that a housing bubble is ahead, we continue to see high levels of appreciation even in the face of higher mortgage rates. And while 20% annual home price appreciation may not continue, the ongoing dynamic of high demand and low supply means homes should still appreciate in the mid to high single digits, which is a healthy level. 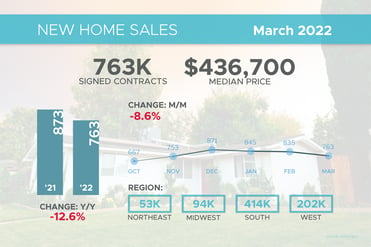 New Home Sales, which measures signed contracts on new homes, were down 8.6% from February to March to a 763,000-unit annualized pace. However, this headline figure is less negative than the media would lead you to believe, given that there was an 8% positive revision to February’s data.

What’s the bottom line? Looking at inventory, there were 407,000 homes for sale at the end of March, which equates to a 6.4 months’ supply. But of the 407,000 homes for sale, only 35,000 or 9% are actually completed. The rest are either not started or under construction. When we factor in the homes that buyers could actually move into today, inventory is closer to about half a month’s supply. 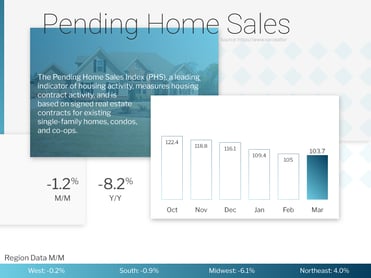 Pending Home Sales, which measure signed contracts on existing homes, fell 1.2% in March, though this was stronger than the 1.8% decline expected. Sales are now down 8.2% year over year. There is no doubt that higher interest rates could be impacting demand, but this report far from signals a “washout” spring homebuying season, as some in the media have said.

In fact, a longer timeframe view shows that the current level of signed contracts is still strong. The annual comparison is skewed because of the huge demand that followed the dip in signed contracts after the start of COVID.

What’s the bottom line? Although higher rates and low inventory around the country have made buying a home challenging for many people, renting is not necessarily a better option. CoreLogic’s Single-Family Rent Index showed that rents were up 13.1% year over year in February, which is the highest increase on record. This report includes both new rents and renewals, which are increasing between 6-8%.

The first look at GDP for the first quarter showed that growth was down 1.4%. This is significant because an old textbook definition of a recession is two consecutive quarters of negative GDP. Note that we will get two more revisions to this figure before getting the final reading in June. In addition, a recession will not be confirmed until September, once the final readings for both the first and second quarters are reported.