Don't be scared of Home Affordability

Don’t Let the Media Scare Your Clients About Home Affordability 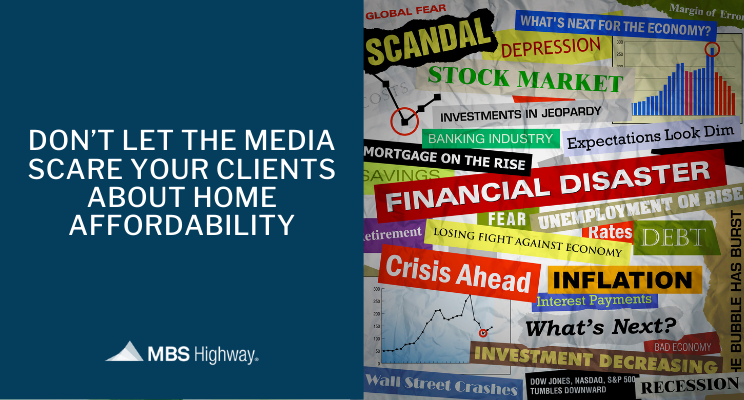 The National Association of Realtors (NAR) recently released Existing Home Sales data for February, and in the accompanying press release, there was a story on affordability that captured media headlines.

NAR’s chief economist, Lawrence Yun, noted, “Housing affordability continues to be a major challenge, as buyers are getting a double whammy: rising mortgage rates and sustained price increases.” He added that, “Monthly payments have risen by 28% from one year ago – which interestingly is not a part of the consumer price index – and the market remains swift with multiple offers still being recorded on most properties.”

While this 28% increase certainly sounds concerning at first glance, it’s important to take everything into account, including incomes. Let’s look at an example:

The above example shows a median priced home in 2021 with 20% down and a 3.375% rate. Notice how the P&I ratio is 20%. The example also shows the numbers if we were to fast forward to today.

Comparing the payments of both loans, the difference of $298 is a 28% increase from last year. But you cannot just look at the payment on its own!

Incomes have increased by 6% since last year, but that’s all wage growth. Private sector wages have gone up by almost 10%, which is likely more indicative of the homebuyer crop. But using 6%, and factoring in the increase in monthly payment, the change in P&I ratio is only 3%. The payment has increased and affordability has gone down slightly, but the impact on homebuyers is much less than the media headlines would lead you to believe.