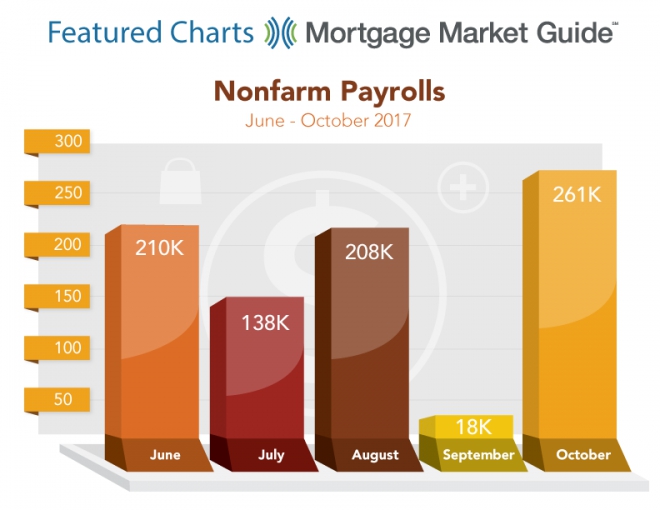 Today’s 30 year fixed rate.  Call for individual quotes that can be better or worse than the rates posted or below

Suggestions that can change during the day: After the headline risk from the Jobs report for October, Mortgage Bond prices are near unchanged. Carefully floating is recommended.

Late morning Commentary:   The Labor Department reported on Friday that job growth rebounded in October. Non-farm Payrolls rose by 261,000 new jobs versus the 300,000 expected while August and September were revised higher by a total of 90,000. The weak showing in September was due in part to Hurricanes Harvey and Irma temporarily stunting job creation. Job growth has averaged 169,000 per month after averaging 192,000 in the same time period in 2016.

Within the Jobs Report, it showed that the Unemployment Rate fell to 4.1%, the lowest since 2006. Total unemployed, or the U6 number, fell to 7.9%, also the lowest since 2006. Average hourly earnings were flat after September saw a 0.5% increase. Overall, the report was positive for the labor markets heading into the holiday shopping season. More people working equals more consumer spending, which boosts the economy.

There will be a new person in charge at the U.S. Federal Reserve in February 2018. On Thursday, President Trump nominated current Fed Governor Jerome Powell to become the 16th chairman of the U.S. Federal Reserve. Mr. Powell is seen on the dovish side of monetary policy, favoring low interest rates, with comparable views to the current Fed Chair Janet Yellen. There should be few, if any, disruptions when Mr. Powell takes over from Ms. Yellen.

Why is now (7/21/21) a good time to refinance? Employment Figures (First Friday of every Month) Jobless Claims (Every Thursday at 7:30 am cst) ADP What is a credit score?