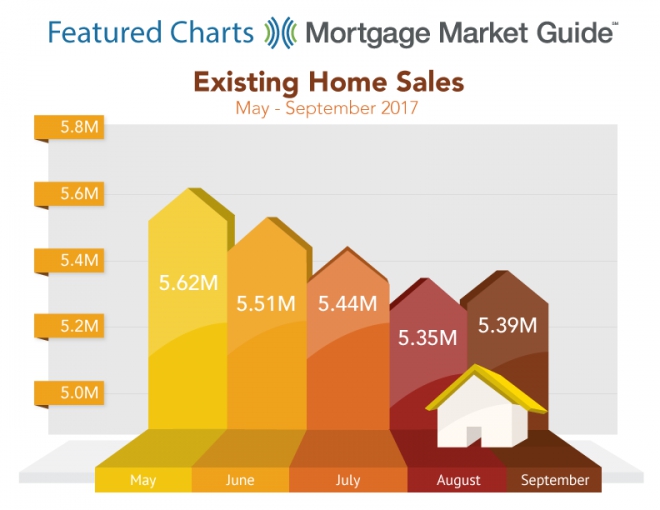 Suggestions that can change during the day: Mortgage Bond prices have slipped below key support levels. Locking is recommended.

Late morning Commentary:   The National Association of REALTORS® reported on Friday that low inventories coupled with rising prices capped sales of existing or previously owned homes in September. Existing Home Sales rose modestly by 0.7% from August to September to an annual rate of 5.39 million units, above the 5.29 million expected. The rise comes after three straight months of declines. From September 2016 to September 2017, sales were down 1.5%. Month-over-month, sales were up in the Midwest, lower in the South and West and were unchanged in the Northeast.

Lawrence Yun, NAR chief economist, says, “Realtors® this fall continue to say the primary impediments stifling sales growth are the same as they have been all year: not enough listings – especially at the lower end of the market – and fast-rising prices that are straining the budgets of prospective buyers.” The median existing-home price for all housing types in September was $245,100, up 4.2% from September 2016 ($235,200). Inventories were running at a 4.2 months' pace, below the 6 month pace that is seen as healthy.

Why is now (7/21/21) a good time to refinance? Employment Figures (First Friday of every Month) Jobless Claims (Every Thursday at 7:30 am cst) ADP What is a credit score?