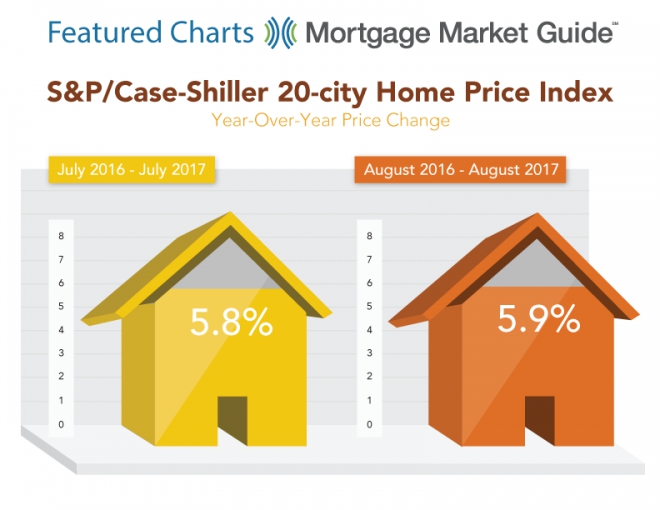 Suggestions that can change during the day:  After some strong economic data, Mortgage Bonds are showing resilience as they trade near unchanged. Carefully floating is recommended.

Late morning Commentary:   Home price gains remained solid in August due in part to low mortgage rates and an improving economy. The S&P/Case-Shiller 20-City Home Price Index rose 5.9% year over year, in line with estimates. David M. Blitzer, managing director and chairman of the Index Committee at S&P Dow Jones Indices, said, “Home price increases appear to be unstoppable.” On a national basis, home prices rose 6.1% from August 2016 to August 2017, up from 5.9% in the previous month.

Americans were upbeat on the U.S. economy and future prospects in October, reports the Conference Board. The Consumer Confidence Index soared to 125.9 this month, the highest since December 2000. The percentage saying business conditions are “good” increased from 33.4% to 34.5%, while those saying business conditions are “bad” rose marginally from 13.2% to 13.5%. However, there was a slight downside in the report. The outlook by consumers on the job market was somewhat less favorable than in September.

The National Retail Federation (NRF) recently reported that holiday sales in November and December are expected to increase between 3.6% and 4%, excluding automobiles, gasoline and restaurants. The total dollar amount should come in around $682 billion, up from $655.8 billion last year. This year, Christmas comes 32 days after Thanksgiving, giving shoppers one more day to finish their shopping. This year's forecast of 3.6% would match last year's and is just above the five-year average of 3.5%.