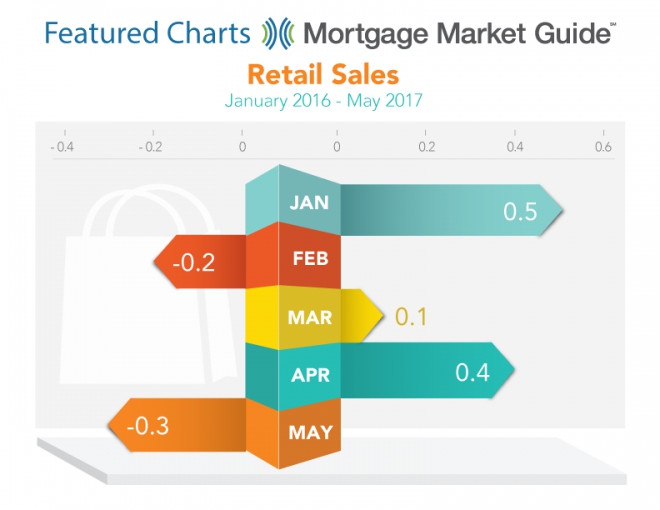 Overview:  Inflation at the consumer level declined in May led lower by cheaper gas prices, shelter, and clothing. The Consumer Price Index (CPI) fell 0.1% versus the unchanged estimate. The Core CPI, which strips out volatile food and energy, rose 0.1%, just below the 0.2% expected. The report will be closely dissected by the Fed members at today's Federal Open Market Committee meeting as to the path of future monetary policy.

Consumer spending eased in May as evidenced by a weak Retail Sales report, which declined the most since January 2016. May Retail Sales fell 0.3% from April led lower by a drop in purchases of motor vehicles, a decline in discretionary spending and lower receipts at gasoline stations. Sales were up nearly 4% from a year ago. Within the report it did show a 0.8% increase in Internet sales.

A shooting occurred early this morning at a Republican baseball practice which left five wounded in Alexandria, Virginia. The shooter is said to be in custody. The practice comes before the annual baseball game between Republicans and Democrats tomorrow, which is a charity event. House Majority Whip Steve Scalise was among those wounded and has been reported in good condition after undergoing surgery.

103.00  Traders keep their eye on round numbers and this is one them with lots of zeros

103.12  Traders keep their eye numbers that have been resistance or support in the past.  This is one of them.

Johnmarbury.com has attempted to verify the information contained on this post.  However any aspect of such may change without notice.  Johnmarbury.com does not provide investment advice and does not represent that any of the information or related analysis is accurate or complete at any time. On October 5th we started posting our rates and leaving them on the site for you to refer back to. This will allow  you see where actual rates have been along with the news that caused the fluctuations on the rate sheet.  I ask that you forgive my spelling and grammatical mistakes. This is due writing skills that are lacking and the need to communicate quickly.  Most of the information posted on this blog along with the charts and indexes are available all during the day to the subscribers of www.themortgagemarketguide.com  The cost of subscription is very reasonable.