Consumer inflation continued to cool in December, but there were also more signs of an economic slowdown. Here are last week’s key headlines:

The Consumer Price Index (CPI), which measures inflation on the consumer level, showed that inflation decreased by 0.1% in December. On an annual basis, inflation declined from 7.1% to 6.5%. Core CPI, which strips out volatile food and energy prices, rose 0.3%. As a result, year-over-year Core CPI decreased from 6% to 5.7%. All of these figures were in line with estimates.

Of particular note, shelter costs make up 39% of Core CPI and they rose 0.8% in December, meaning they played a big role in the 0.3% monthly gain in Core CPI. However, shelter costs have been lagging in the CPI report, as they have been coming down in more real-time data. Once these moderating shelter costs are reflected in the CPI data, they should add additional downside pressure to inflation.

What’s the bottom line? Inflation is the arch enemy of fixed investments like Mortgage Bonds because it erodes the buying power of a Bond's fixed rate of return. If inflation is rising, investors demand a rate of return to combat the faster pace of erosion due to inflation, causing interest rates to rise as they did throughout much of last year.

Since lower inflation typically helps both Mortgage Bonds and mortgage rates improve, these signs of easing inflation are welcome. In fact, if you took the last three monthly CPI readings and averaged them over the next 12 months, the run rate would be 1.6%. Doing the same for Core CPI would give us a run rate of 3.2%. If the lower monthly readings we’ve seen recently continue, they will help us make substantial progress towards the Fed’s 2% inflation target.

The National Federation of Independent Business (NFIB) Small Business Optimism Index was reported at 89.8 for December. This was the lowest reading since last June and a hair above the weakest since 2013. Among the key takeaways, 32% of small business owners reported that inflation remained their biggest problem, so evidence of cooling inflation is certainly a welcome sign.

What’s the bottom line? Overall, small business owners are not feeling optimistic about the year ahead, per NFIB’s chief economist Bill Dunkelberg. He explained, “Owners are managing several economic uncertainties and persistent inflation and they continue to make business and operational changes to compensate.” 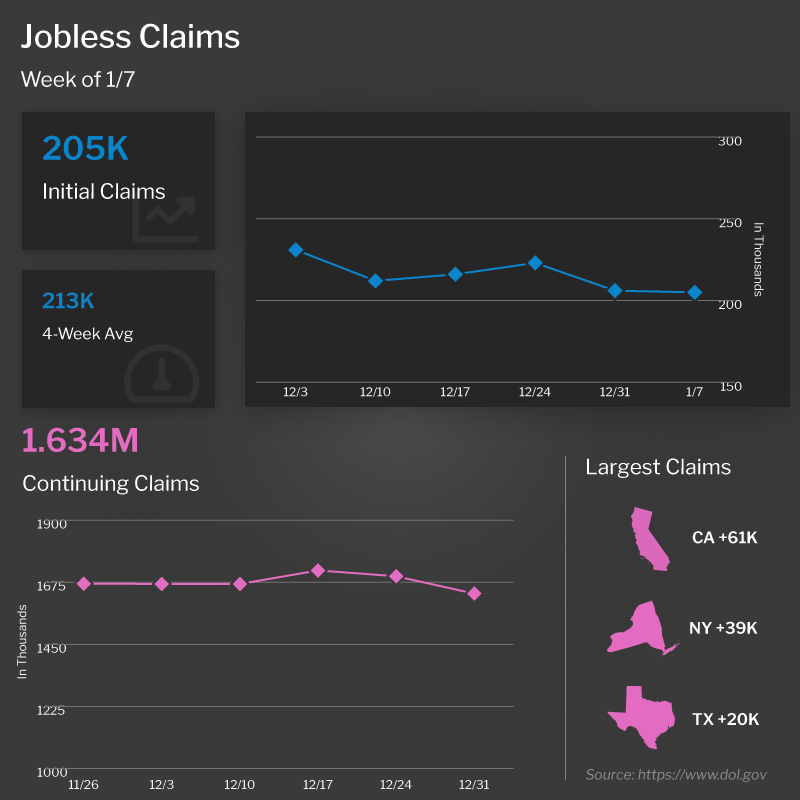 Initial Jobless Claims remained relatively flat in the latest week, as the number of people filing for unemployment benefits for the first time fell by 1,000 to 205,000. Continuing Claims, which measure people who continue to receive benefits after their initial claim is filed, declined 63,000 to 1.634 million.

What’s the bottom line? Even though Continuing Claims fell in the latest week, they have now risen by 270,000 since the beginning of October. Plus, this Continuing Claims data was for the week ending December 31, so it’s possible that the number of claims filed may have been higher if it wasn’t for the holidays. In addition, the Jobs Report for December showed that there was a big spike in both part-time and second jobs, which also could have impacted the number of jobless claims that were filed.

The ISM Services Index, which measures economic activity in the services sector, has now joined its manufacturing brethren in moving below 50 into contraction territory. The index fell to 49.6% in December from 56.5% in November, marking the first reading below 50 since December 2009 (other than the start of the pandemic in the spring of 2020). Among the components of the index, new orders dropped sharply to 45.2%, employment fell into contraction at 49.8% and supplier deliveries eased again to 48.5%.

What’s the bottom line? Survey respondents (which include purchasing and supply executives from non-manufacturing firms) spoke to the challenges they’re facing, with one noting that, “Orders from customers are softening, and some orders are being canceled.” Another explained, “Our company has tightened hiring of new employees month over month, due to uncertainty around the strength of the economy going into 2023.” All in all, the U.S. economy continues to weaken, and this is now spreading into the services sector.

The yield spread between the 10-year Treasury and 3-month Treasury has inverted almost 120 basis points. Normally, you would expect to receive a higher rate of return for putting your money away for 10 years versus 3 months. But when there is an economic slowdown and fear in the markets, the yield curve can go inverted – meaning that 3-month yields are higher than 10-year yields, which is backwards or upside down.

What’s the bottom line? Looking back at the history of recessions, we always see an inversion occur ahead of a recession, although the actual recession may not follow immediately. While a recession is not a great thing for the economy, one positive aspect is that periods of recession are always coupled with lower interest rates.

Gift cards are a popular present over the holiday season and, unfortunately, that means a rise in gift card scams tends to follow in the new year. These important tips from the Federal Trade Commission (FTC) can help you and your loved ones stop scammers from stealing any funds.

Just a few examples of the most common gift card scam scenarios include someone calling and pretending to be from a government agency, claiming you owe taxes or a fine. Another often reported example is a scammer claiming to be a friend or family member who is in trouble and needs money immediately. You may also have a scammer claim you won a prize, but you must pay fees in order to receive it. In each of these situations, scammers will suggest using gift cards to pay.

Other strong signs that you may be talking to a scammer include pressure to act quickly, being asked for a gift card number and PIN, or being told to buy cards at several stores so cashiers aren’t suspicious.

If you think you’ve been contacted by a gift card scammer, the FTC recommends reporting it at ReportFraud.ftc.gov.

On Wednesday, look for the National Association of Home Builders Housing Market Index, which will give us a near real-time read on builder confidence for this month. Housing Starts and Building Permits for December will be reported on Thursday, while December’s Existing Home Sales follows on Friday.

January’s manufacturing data for the New York and Philadelphia regions will provide an important update on that sector when those reports are released on Tuesday and Thursday, respectively.

Also of note, the Producer Price Index for December will give us the latest news on wholesale inflation when it is reported on Wednesday, while Retail Sales data for December will also be released. Plus, the latest Jobless Claims remain important to monitor when that data is released as usual on Thursday.

Mortgage Bonds tested the very difficult ceiling of resistance at 101.671 but were rejected on Friday. The 10-year tested support at 3.43% but was also rejected and moved higher as a result.