Consumer inflation continues to cool, while there were some important takeaways from the Fed’s latest rate hike decision. Read on for these crucial details:

As expected, the Fed hiked its benchmark Fed Funds Rate by 50 basis points at its meeting last Wednesday. This was the Fed’s seventh rate hike of the year though it was a slower pace after four consecutive 75 basis point hikes at their meetings in June, July, September and November. The Fed Funds Rate is the interest rate for overnight borrowing for banks and it is not the same as mortgage rates. When the Fed hikes the Fed Funds Rate, they are trying to slow the economy and curb inflation.

While the markets initially reacted negatively to this news because it signaled that the Fed intended to keep rates higher for longer than anticipated, sentiment shifted during Fed Chair Jerome Powell's press conference. He acknowledged that, “The inflation data received so far for October and November show a welcome reduction in the monthly pace of price increases."

Powell went on to telegraph a 25 basis point hike at the Fed’s next meeting on February 1. This continual slowing in the pace of hikes was considered a positive sign, as it signaled to the markets that inflation is getting under control.

The Consumer Price Index (CPI), which measures inflation on the consumer level, showed that inflation increased by 0.1% in November, coming in lower than estimates. On an annual basis, inflation declined from 7.7% to 7.1%, which was much cooler than the 7.3% expected. Core CPI, which strips out volatile food and energy prices, also came in softer than forecasted with a 0.2% rise. As a result, year-over-year Core CPI decreased from 6.3% to 6%, which again was lower than estimates.

Of particular note, shelter costs make up 39% of Core CPI and they rose 0.6% in November, meaning they played a big role in the 0.2% monthly gain in Core CPI. However, shelter costs have been lagging in the CPI report.

In more real-time data, we are seeing a moderation in rental prices. For example, Apartment List’s National Rent Report showed that rents were up 4.7% from January through November of this year, well below the 18% rise reported this time last year. These moderating shelter costs should be reflected in the CPI data hopefully by January, which should add additional downside pressure to inflation.

What’s the bottom line? Inflation is the arch enemy of fixed investments like Mortgage Bonds because it erodes the buying power of a Bond's fixed rate of return. If inflation is rising, investors demand a rate of return to combat the faster pace of erosion due to inflation, causing interest rates to rise as we’ve seen this year.

When we look at how inflation is calculated, there is hope that it will continue to move lower next year. CPI is a rolling twelve-month report. If we add the previous 12 monthly readings and account for rounding and compounding, we come up with the year-over-year figure. For example, when the data for November 2022 was released last week (0.2% for Core CPI), it replaced the data for November 2021 (0.5%) in the calculation of annual inflation.

Going forward, the inflation readings that will be replaced are high, so if we see lower monthly readings like we did in November’s report, the annual rate of inflation will continue to move lower. Again, lower inflation typically helps both Mortgage Bonds and mortgage rates improve.

The National Federation of Independent Business (NFIB) Small Business Optimism Index was reported at 91.9 for November. While this was a slight improvement from October, this is the eleventh straight month the index has come in well below the 49-year average of 98. Among the key takeaways, 32% of small business owners reported that inflation remained their biggest problem, so evidence of cooling inflation is certainly a welcome sign.

What’s the bottom line? The Cass Freight Index is a monthly measure of the North American freight market and it provides valuable insight into supply chain indicators and the overall economy. The latest data shows that the supply and demand imbalance in trucking markets has loosened significantly this year. As a result, freight rates are leveling off and set to soften further in the months to come. Shippers are starting to see real savings and considerable cost relief is now likely for 2023, which is positive news for the inflation picture. 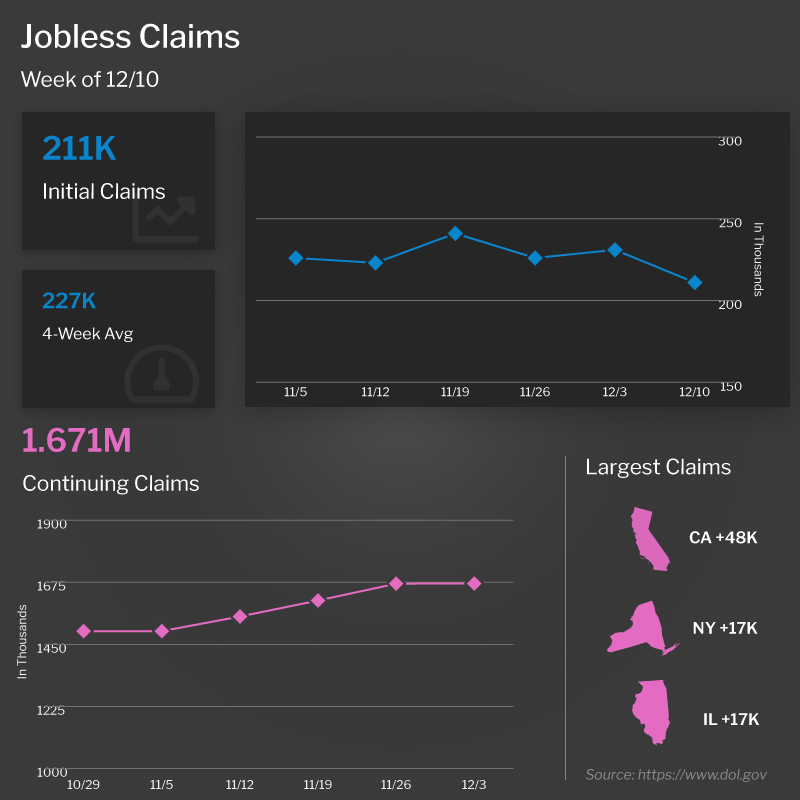 The number of people filing for unemployment benefits for the first time fell by 20,000 in the latest week, as 211,000 Initial Jobless Claims were reported. This is the lowest level of first-time filers since September. Continuing Claims, which measure people who continue to receive benefits after their initial claim is filed, rose 1,000 to 1.671 million.

What’s the bottom line? Continuing Claims have now risen by 307,000 since the beginning of October to their highest level since February. This points to a potential slowdown in the pace of hiring, suggesting it’s becoming harder for many to find a job once they’re let go.

It’s a wonderful season for baking, and this Chocolate Chip Banana Bread courtesy of our friends at Delish makes for a delicious treat.

Bake until a toothpick inserted comes out clean, approximately 1 hour. Cool for 10 minutes and then turn onto a cooling rack to cool completely.

The markets have plenty of news to feast on this week, beginning Monday with the National Association of Home Builders Housing Market Index, which will give us a near real-time read on builder confidence for this month. Housing Starts and Building Permits for November will be reported on Tuesday, while November’s Existing Home Sales and New Home Sales follow on Wednesday and Friday, respectively.

On Thursday, the latest Jobless Claims remain important to monitor, as does the final reading for third quarter GDP.

Ending the week, crucial inflation numbers for November will be reported Friday via the Fed’s favored measure, Personal Consumption Expenditures.