With reports on housing, jobs, inflation and Fed chatter, the markets had plenty to digest last week. Here are the highlights:

-Why Signed Contracts on Existing Homes Are Set to Rebound

The Bureau of Labor Statistics (BLS) reported that there were 263,000 jobs created in November, which was stronger than expectations of 200,000 job gains. Revisions to the data from September and October cut 23,000 jobs in those months combined. The unemployment rate held steady at 3.7%.

What’s the bottom line? While the headline job growth number appears strong, this figure is not what it seems.

There are two reports within the Jobs Report and there is a fundamental difference between them. The Business Survey is where the headline job number comes from and it's based predominately on modeling. The Household Survey, where the Unemployment Rate comes from, is done by actual phone calls to 60,000 homes.

The Household Survey also has a job loss or creation component, and it showed there were 138,000 job losses, which is a pretty big disparity from the headline number of 263,000 job gains. The Household Survey also showed that the labor force decreased by 186,000. As a result, the unemployment rate remained the same – but for the wrong reasons. It was not due to strong job growth, but rather more people leaving the labor force than job losses. 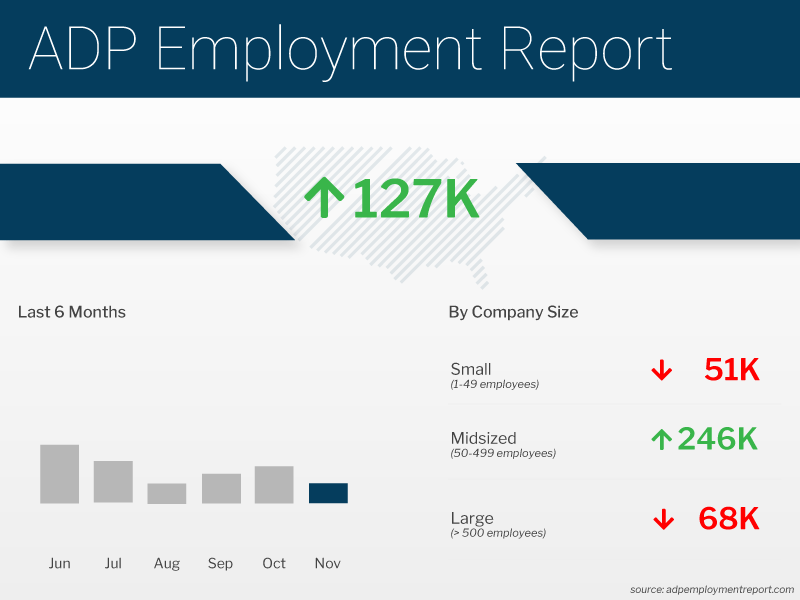 The ADP Employment Report, which measures private sector payrolls, showed that there were 127,000 jobs created in November. This was weaker than the 200,000 job gains that were expected and almost half the amount reported in October. Declines were seen in some of the more interest rate-sensitive sectors like construction and manufacturing, while leisure and hospitality and healthcare were bright spots.

ADP also reported that pay growth “remained elevated even as it continued a modest but broad-based deceleration.” Annual pay for job stayers increased 7.6% year over year, while job changers saw an average increase of 15.1%, which is down for the fifth consecutive month.

What’s the bottom line? Nela Richardson, chief economist for ADP, said, “Turning points can be hard to capture in the labor market, but our data suggest that Federal Reserve tightening is having an impact on job creation and pay gains. In addition, companies are no longer in hyper-replacement mode. Fewer people are quitting and the post-pandemic recovery is stabilizing.” 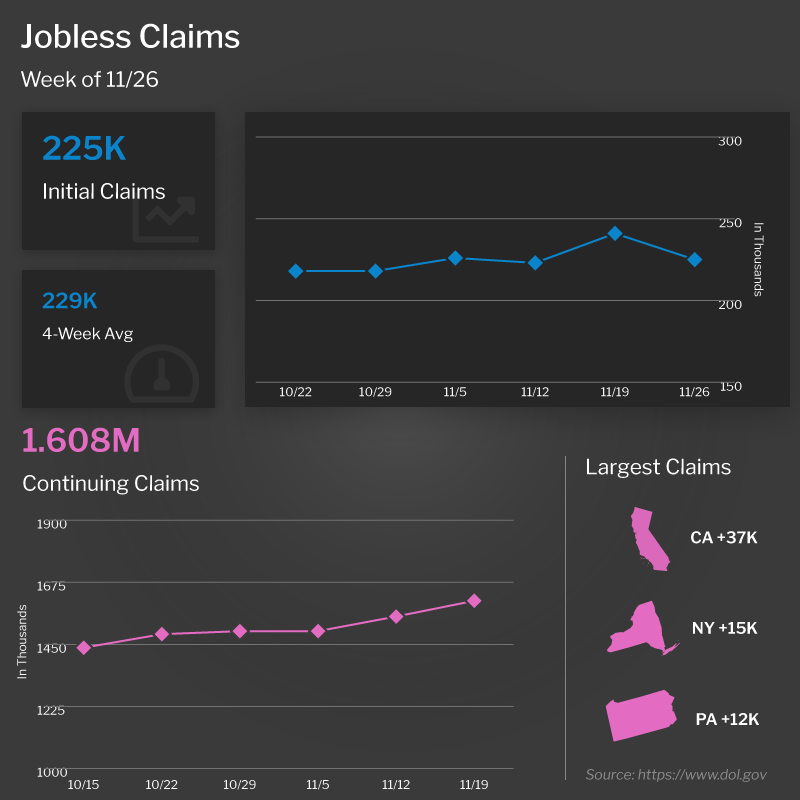 The number of people filing for unemployment benefits for the first time fell by 16,000 in the latest week, as 225,000 Initial Jobless Claims were reported. Continuing Claims, which measure people who continue to receive benefits after their initial claim is filed, saw a substantial jump of 57,000 to 1.608 million.

What’s the bottom line? The latest Initial Jobless Claims data was for the week of Thanksgiving, so it’s likely the number of claims filed may have been higher if it wasn’t for the holiday. Continuing Claims data measured the week before Thanksgiving, so they were unaffected by the holiday. Continuing Claims have now risen by more than 244,000 since the beginning of October and have reached their highest level since February, suggesting that it’s becoming harder for people to find a job once they’re let go.

The Fed’s favorite measure of inflation, Personal Consumption Expenditures (PCE), showed that headline inflation rose 0.3% in October, which was in line with estimates. The year over year reading declined from 6.3% to 6% and is down from the peak of 7% seen in June. Core PCE, which strips out volatile food and energy prices, rose by 0.2% with the year-over-year change falling from 5.2% to 5%, down from the peak of 5.4% in February.

On a related note, Fed Chair Jerome Powell’s remarks last week sparked a rally in the markets, as he said that smaller hikes to the Fed’s benchmark Fed Funds Rate could start as soon as their December 13-14 meeting. The Fed Funds Rate is the interest rate for overnight borrowing for banks and it is not the same as mortgage rates. When the Fed hikes the Fed Funds Rate, they are trying to slow the economy and curb inflation.

Powell’s less hawkish tone sets up a potential 50 basis point hike at next week’s meeting, which would mark their seventh rate hike of the year, including four consecutive aggressive 75 basis point hikes at their meetings in June, July, September and November.

Why Signed Contracts on Existing Homes Are Set to Rebound 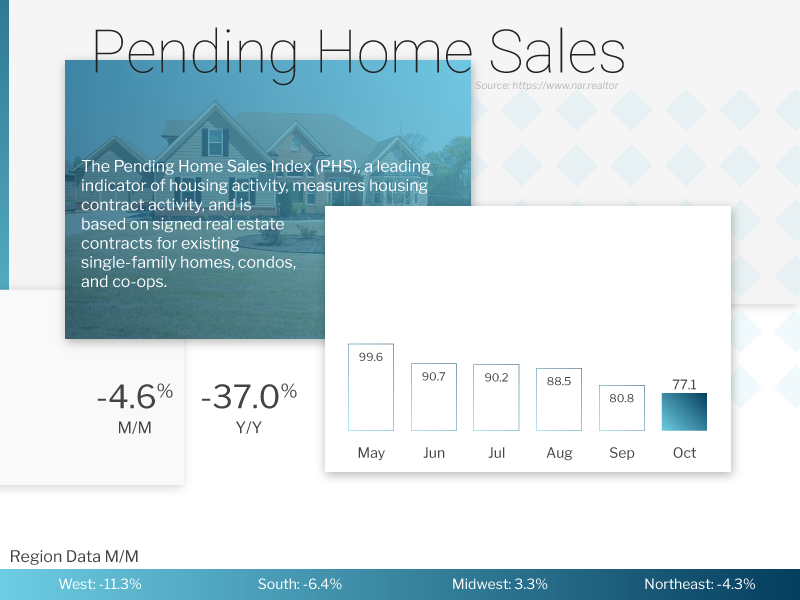 Pending Home Sales fell 4.6% from September to October, marking the fifth straight monthly decline. Sales were also 37% lower than they were in October of last year. This is a critical report for taking the pulse of the housing market, as it measures signed contracts on existing homes, which represent around 90% of the market.

What’s the bottom line? Lawrence Yun, chief economist for the National Association of Realtors, noted, “October was a difficult month for home buyers as they faced 20-year-high mortgage rates.” Yet, he added that “upcoming months should see a return of buyers, as mortgage rates appear to have already peaked and have been coming down since mid-November.” 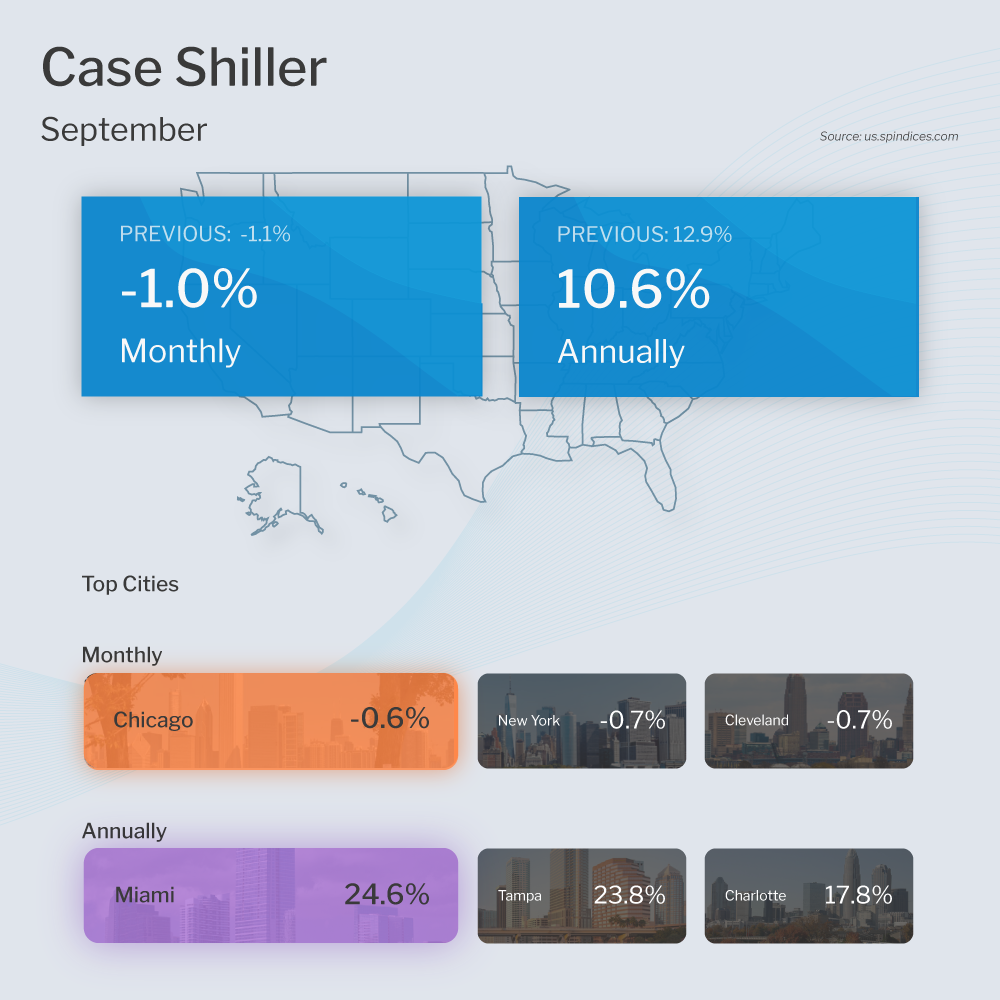 The Case-Shiller Home Price Index, which is considered the “gold standard” for appreciation, showed home prices fell 1% in September but they were 10.6% higher when compared to September of last year. This annual reading is a decline from the 12.9% gain reported in August but still strong.

The Federal Housing Finance Agency (FHFA) also released their House Price Index. This report measures home price appreciation on single-family homes with conforming loan amounts, which means it most likely represents lower-priced homes. Home prices rose 0.1% from August to September and they were up 11% from September of last year. This is a decline from the 11.9% annual increase reported in August, but again still solid on an annual basis.

Further softness in home prices is possible in the next several Case-Shiller reports as the full impact of peak rates was not realized in September. And while home prices are now down 2.5% from their peak, this is a far cry from a housing crash of 20% that some in the media are predicting.

The second reading of third quarter Gross Domestic Product (GDP) showed that the U.S. economy grew by 2.9%. This is an upward revision from the first reading of 2.6% and also better than the 2.7% expected. Note that significant revisions are still possible when the final reading for the third quarter is released on December 22.

What’s the bottom line? GDP functions as a scorecard for the country’s economic health, so the positive reading in the third quarter is a welcome sign after two consecutive negative GDP readings in the first and second quarters of this year.

Thursday, December 8 is National Brownie Day! Delight all the brownie-lovers you know with this decadent Double Chocolate Brownie recipe courtesy of Taste of Home.

Pour brownie batter into a greased 13x9-inch baking pan. Bake until brownies begin to pull away from sides of the pan, about 35 to 40 minutes. Cool in pan on a wire rack before enjoying.

This week’s economic calendar is relatively quiet but highlighted by the latest Jobless Claims data on Thursday and the Producer Price Index on Friday, which will give us an update on wholesale inflation for last month.

After the stronger than expected Jobs Report was released Friday morning, Mortgage Bonds initially gave back some of the gains they had made earlier in the week. Yet they were able to recover their losses later on Friday after testing their 100-day Moving Average. The next celling is all the way up at 102.788. The 10-year tested overhead resistance at 3.57% and was rejected. The next floor is at their 100-day Moving Average.