7:42 Am The Producer Price Index, which measures wholesale inflation, was reported for the month of October. The Headline PPI figure was up 0.2%, which was below expectations of 0.4%. On a year over year basis PPI decreased by 0.4% from 8.4% to 8.0%, which was lower than the 8.3% estimate. Core PPI, which strips out food and energy prices, was unchanged in October, against expectations of a 0.3% gain. Year over year Core PPI decreased by 0.4% 6.7%, which was below the 7.2% estimate.

8:37 AM : The Mortgage Bankers Association released their Mortgage Application Data for the week ending 11/11, showing that overall application volume increased by 2.7%. Applications to Purchase a home were up 4.4% for the week and down 46% year over year. Refinances decreased by 1.6% from the previous week and were 88% lower from one year ago.

Expectations at this time Fed Raises rates by  50 BP instead of 75 BP on Dec 14, 2022.  The lower Dec hike is a change that indicates the Fed may be thinking they are going too far too fast.

-Construction of Homes Continues to Slow 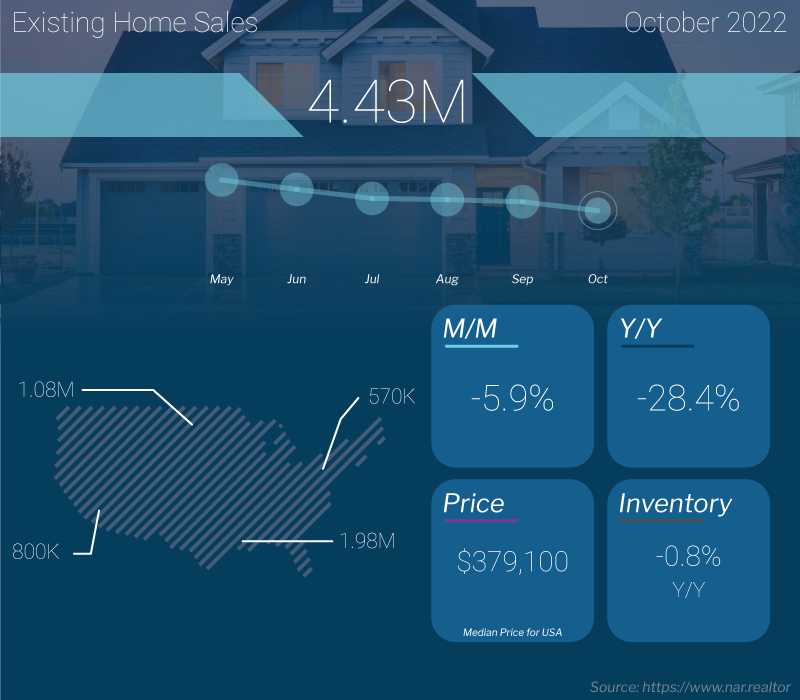 Existing Home Sales fell 5.9% from September to October to a 4.43 million unit annualized pace, per the National Association of Realtors (NAR). This was slightly stronger than expectations looking for a 7% decline. Sales were also 28.4% lower when compared to October of last year. This is a critical report for taking the pulse of the housing market, as it measures closings on existing homes, which represent around 90% of the market.

What’s the bottom line? While activity has slowed in the housing market, home prices are still being supported by continued low inventory. Plus, the rise in inventory that occurs every summer from parents listing their homes so their kids are settled for the new school year has crested.

However, there were only 754,000 “active listings” in October, which means that 38% of the “inventory” in the Existing Home Sales report is under contract and not truly available. This speaks to demand, as a normal market has 25% of inventory under contract. When looking at the month’s supply of available homes for sale, it’s really 2.5 months.

And while there are reports that homes are sitting longer on the market, they are still selling quickly when priced correctly. Average days on market increased slightly from 19 days in September to 21 days in October, while 64% of homes were on the market for less than 30 days.

Construction of Homes Continues to Slow

Fall brought a chill to homebuilding as Housing Starts, which measure the start of construction on homes, fell 4.2% from September to October. Starts for single-family homes, which are the most important because they are in such high demand among buyers, declined 6.1% from September and 20.8% from October of last year. Building Permits for single-family homes, which are indicative of future supply, also fell 3.6% for the month and 22.1% year over year.

What’s the bottom line? Builders have clearly slowed down production and it appears they have learned their lesson from 2006 and 2007, when they kept building homes despite waning demand. This means the supply and demand dynamics that we are seeing today are the exact opposite of what we saw in 2007 when there was a crash. While we are certainly seeing an activity recession in housing, low inventory should continue to be supportive of home prices. 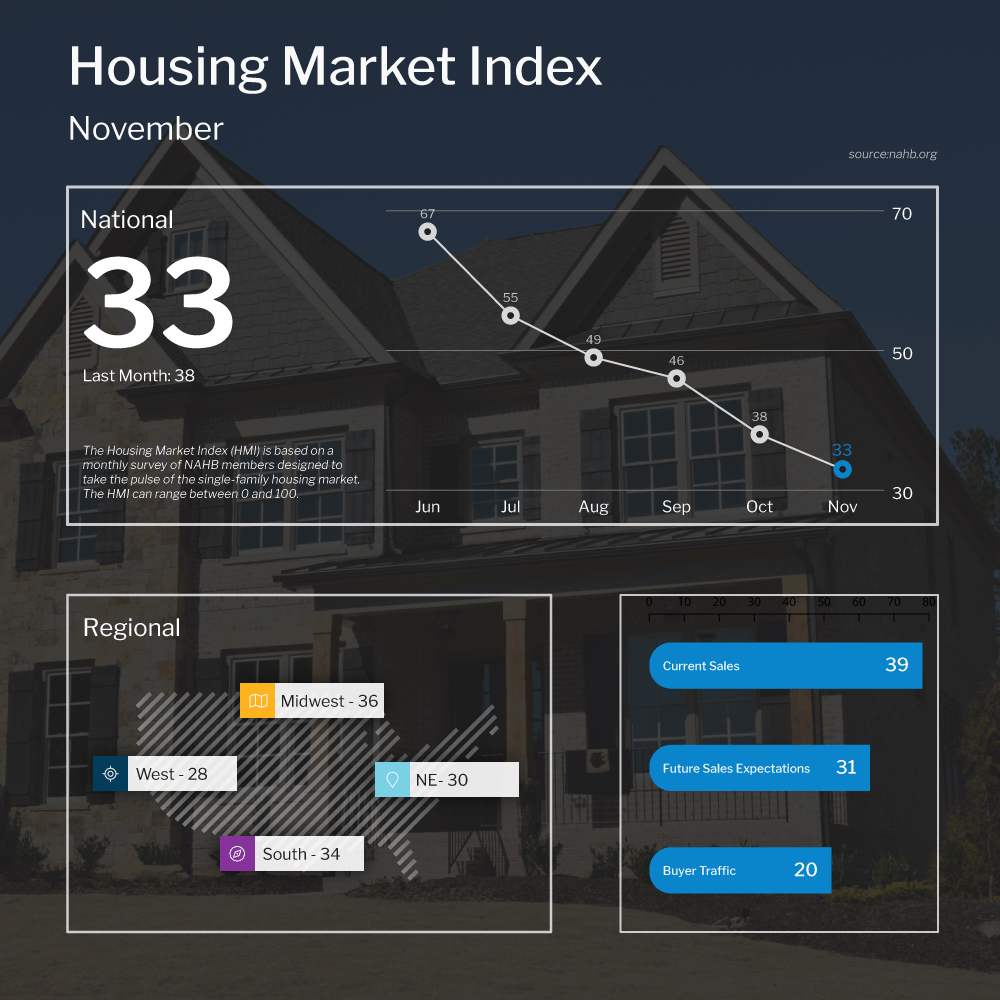 The National Association of Home Builders (NAHB) Housing Market Index, which is a near real-time read on builder confidence, fell 5 points to 33 in November. All components of the index moved lower, with current sales conditions falling six points to 39, sales expectations for the next six months declining four points to 31 and buyer traffic dropping five points to 20.

What’s the bottom line? Any reading above 50 on this index, which runs from 0 to 100, signals expansion while readings below 50 signal contraction. This month’s confidence reading is the lowest since June 2012 (except for the start of the pandemic in the spring of 2020), which is unsurprising given that building material costs remain elevated while higher interest rates have caused many homebuyers to pause their search.

The NAHB also noted that 59% of builders reported using incentives to help increase buyer traffic, with “a big increase in usage from September to November.” For example, 25% of builders said they are paying points for buyers in November as compared to 13% in September. Mortgage rate buy-downs rose from 19% to 27% over the same time period, while 37% of builders cut prices in November versus just 26% in September.

The Producer Price Index (PPI), which measures inflation on the wholesale level, rose by 0.2%, which was half of what economists had expected. On a year-over-year basis, PPI decreased from 8.4% to 8%. Core PPI, which strips out volatile food and energy prices, was flat in October while the annual figure decreased from 7.2% to 6.7%. All of these readings were cooler than expected.

What’s the bottom line? Besides causing higher prices, inflation is the arch enemy of fixed investments like Mortgage Bonds because it erodes the buying power of a Bond's fixed rate of return. If inflation is rising, investors demand a rate of return to combat the faster pace of erosion due to inflation, causing interest rates to rise as we’ve seen this year. The Bond market reacted favorably to this cooler inflation report when it was released last Tuesday.

Initial Jobless Claims fell by 4,000 in the latest week, as 222,000 people filed for unemployment for the first time. Continuing Claims, which measure people who continue to receive benefits after their initial claim is filed, rose 13,000 to 1.507 million.

What’s the bottom line? Initial Jobless Claims are still relatively low, as employers continue to hold on to workers. However, Continuing Claims remain the real story as they have risen by 143,000 since the beginning of October. This reflects a slower pace of hiring and could suggest that it’s becoming harder for people to find a job once they’re let go. Given the headlines of large companies issuing layoffs, it’s possible Continuing Claims could continue to increase, and the labor market may not be as strong as reports have indicated.

One of the best things about Thanksgiving dinner can be the leftovers! This delicious Turkey Frittata recipe is the perfect day-after breakfast treat.

Preheat the broiler. In a large skillet, heat 1 tablespoon olive oil over medium-high heat. Chop 1/2 onion and 1/2 red bell pepper, add to skillet and cook for 3 minutes. Stir in a cup of boiled, chopped potatoes and cook until golden brown. Add 1/2 cup leftover turkey and toss to coat.

In a mixing bowl, beat together 6 eggs and 1/4 cup cream. Season with salt and pepper, pour into skillet and stir in 2 tablespoons chopped parsley, basil or cilantro. Top with 1/2 cup grated cheddar or mozzarella cheese.

Brown under broiler for about 2 to 3 minutes until frittata puffs.

The markets will gobble up a heap of economic news on Wednesday ahead of the Thanksgiving holiday. Key reports include New Home Sales and Durable Goods for October and the latest Jobless Claims figures. Plus, the minutes from the Fed’s latest meeting will also be released and these always have the potential to move the markets.