Home sales continued to cool in September while consumer inflation needs to cool further. Find out more about these stories, along with the latest news on home price appreciation, GDP and Jobless Claims.

-GDP Turns Positive in the Third Quarter … For Now

The Fed’s favorite measure of inflation, Personal Consumption Expenditures (PCE), showed that headline inflation rose 0.3% in September and remained at 6.2% year over year. Both readings were exactly in line with estimates. Core PCE, which strips out volatile food and energy prices, rose by 0.5% with the year-over-year change rising from 4.9% to 5.1%.

What’s the bottom line? Note that when the Fed says they want to see inflation fall to around 2%, they are talking about annual Core PCE, which is now at 5.1% and quite a bit higher than the Fed’s target. But there is some hope that inflationary pressures could begin easing.

Inflation is calculated on a rolling 12-month basis, which means that the total of the past 12 monthly inflation readings will give us the year-over-year rate of inflation. For example, when the data for September 2022 was released last week, it replaced the data for September 2021 in the calculation of annual inflation. Inflation readings after September of last year are higher comparisons, so if we see lower monthly readings this fall and early next year, the annual rate of inflation could then move lower.

Pending Home Sales fell 10.2% from August to September, marking the fourth straight monthly decline. Sales were also 31% lower than they were in September of last year. This is a critical report for taking the pulse of the housing market, as it measures signed contracts on existing homes, which represent around 90% of the market.

What’s the bottom line? Lawrence Yun, chief economist for the National Association of Realtors, noted that new home listings are lower than they were a year ago because many homeowners are staying put with 3% mortgage rates that they locked in before this year. He added, “Only when inflation is tamed will mortgage rates retreat and boost home purchasing power for buyers."

New Home Sales, which measure signed contracts on new homes, fell 10.9% in September to a 603,000-unit annualized pace. However, this was stronger than estimates that were looking for a 13% decline. Sales were also 17.6% lower when compared to September of last year.

There were 462,000 new homes for sale at the end of September, which equates to a 9.2 months’ supply. However, only 56,000 or about 12% were actually completed, with the rest either not started or under construction. The number of completed homes equates to a 1.1 months’ supply, well below the six months’ supply that is considered representative of a balanced market.

The median home price for new homes rose 8% to $471,000, after a 6% decline in the previous report. However, this is not the same as appreciation. It simply means half the homes sold were above that price and half were below it. The rise last month was due to the mix of sales, as there was an uptick in sales of homes over $500,000.

What’s the bottom line? Homebuilders have seen declining buyer traffic in recent months. For example, Lennar, the second largest homebuilder in the U.S., reported that new sales orders fell 12% in the third quarter when compared to the same timeframe last year. PulteGroup, another large builder, reported that 24% of contracts were canceled in the third quarter. While this sounds alarming, it’s important to note that even in a hot market like the second quarter of this year, they reported 15% cancellations. 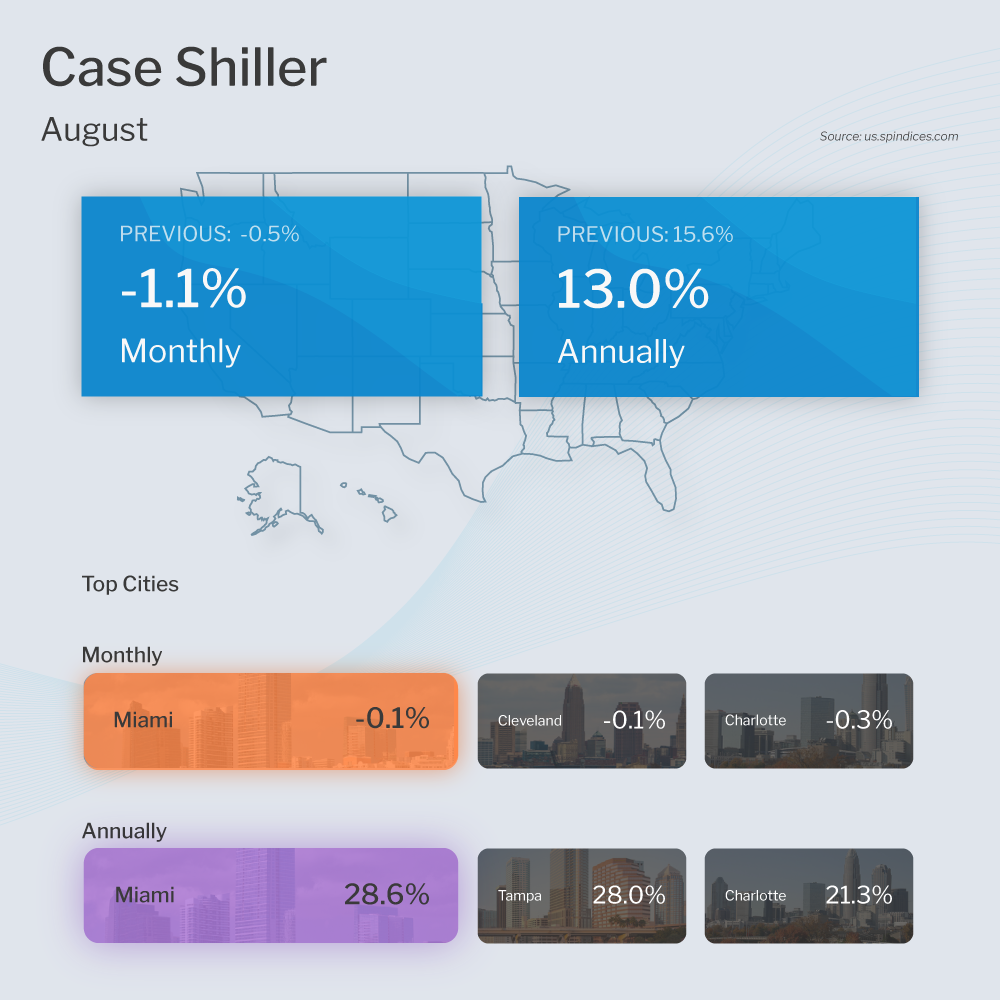 The Case-Shiller Home Price Index, which is considered the “gold standard” for appreciation, showed home prices fell 1.1% in August but they were 13% higher when compared to August of last year. This annual reading is a decline from the 15.6% gain reported in July but still strong.

The Federal Housing Finance Agency (FHFA) also released their House Price Index. This report measures home price appreciation on single-family homes with conforming loan amounts, which means it most likely represents lower-priced homes. Home prices fell 0.7% from July to August but they rose 11.9% from August of last year. This is a decline from the 13.9% annual increase reported in July, but again still solid on an annual basis.

What’s the bottom line? While Case-Shiller’s national index did show a month-over-month decline, the majority of the decline was seen in some of the larger cities like San Francisco (-4.3%), Seattle (-3.9%), San Diego (-2.8%), Los Angeles (-2.3%), Denver (-2.3%) and Phoenix (-2.1%). When removing these cities that were overheated, most other markets were relatively flat.

GDP Turns Positive in the Third Quarter … For Now

The advanced or first reading of third quarter GDP showed that the U.S. economy grew by 2.6%. This was better than the 2.3% expected and follows two consecutive negative readings in the first and second quarters of this year.

What’s the bottom line? It’s important to remember that this is the first of three readings, and there can be significant revisions when the second and final readings are released on November 30 and December 22, respectively.

On that note, Core Durable Goods orders for September showed a decline of 0.7% month over month. This number is a good gauge of business spending, as it reflects nondefense capital goods used in the production of goods and services, excluding aircraft. September’s reading was much weaker than the 0.3% gain expected while August’s report was also revised lower and September’s shipments came in light. These components are factored into GDP and may lead to some downward revisions in the second and final readings for the third quarter.

Initial Jobless Claims rose by 3,000 in the latest week, as 217,000 people filed for unemployment benefits for the first time. Continuing Claims, which measure people who continue to receive benefits after their initial claim is filed, rose 55,000 to 1.438 million.

What’s the bottom line? Initial Jobless Claims still remain quite low, as employers continue to hold on to workers. However, Continuing Claims have risen significantly over the past few weeks. This reflects a slower pace of hiring, which can be the first thing to ease in an economic downturn, followed by layoffs. On Friday, the Bureau of Labor Statistics will release the Jobs report for October and estimates call for 190,000 jobs created, which would be the slowest since a negative print was seen in December 2020.

This Sunday, November 6 marks the end of Daylight Saving Time for much of the country. It also serves as a great reminder to tackle these important home tasks, per our friends at Good Housekeeping.

Check the batteries in all smoke and carbon monoxide detectors and replace any as needed. Also, clean out your dryer’s vents and ducts, as lodged lint is a common cause of dryer fires.

Replace or clean filters throughout your home, including air filters as well as those in your heating and air-conditioning units. Now could also be a good time to clean your oven and declutter your pantry, especially if Thanksgiving dinners or holiday parties are ahead.

Replenish your emergency kit as needed, including flashlight batteries, canned food and water, first-aid kit items, toiletries, paper towels and plates, blankets and extra clothes. Be sure to add gloves, hats, boots and other winter-weather gear as needed.

The Fed and labor market data will be the key headlines this week as the Fed’s two-day meeting begins on Tuesday, with the Monetary Policy Statement and press conference coming on Wednesday. The Fed is expected to again hike its benchmark Fed Funds Rate to help cool inflation. Investors will be closely watching their actions and commentary.

Also on Wednesday, ADP’s new Employment Report will give us an update on private payrolls for October. The latest Jobless Claims data will be reported on Thursday while Friday brings the Bureau of Labor Statistics Jobs Report for October, which includes Non-farm Payrolls and the Unemployment Rate.

Mortgage Bonds continue to battle their 25-day Moving Average. If they can remain above it, there is a lot of room to the upside before reaching the next ceiling at 100.141. The 10-year ended last week trading at around 4.01%, after getting rejected from its 25-day Moving Average support level.