7:30 AM Mortgage Bonds start the week down 23 BP (Price Down Yield Up) 10 year Treasury is down 3 BP. Bias Locking

Market Wrap - Mortgage Bonds continued to perform poorly today.  The Bank of England (BOE) was buying their bonds and now decided to stop, and this eliminated a buyer from the market.  There is some concern that they will become a seller soon.  This uncertainty is not good for bonds or mortage rates.

7:30 AM The Producer Price Index, which measures wholesale inflation, was reported for the month of September. The Headline PPI figure was up 0.4%, which was above expectations of 0.2%. On a year over year basis PPI decreased by 0.2% from 8.7% to 8.5%, which was higher than the 8.4% estimate,. Core PPI, which strips out food and energy prices, increased by 0.3%, which was in line with expectations. Year over year Core PPI remained flat at 7.2%, which was just below the 7.3% estimate.

7:30 AM Jobless Claims  Initial Jobless Claims, which measures individuals filing for unemployment benefits for the first time, was reported at 228,000 claims for last week. This represents an increase of 9,000 from the previous revised report of 219,000 claims, and was above expectations of 225,000. Continuing Claims increased by 3,000 to 1.368 Million claims, which was greater than estimates of no change.

Inflation was hotter than anticipated in September while initial unemployment claims are trending higher. Here are the key details:

-Consumer Inflation Remains Hot But Is Hope Ahead?

Consumer Inflation Remains Hot But Is Hope Ahead?

The Consumer Price Index (CPI), which measures inflation on the consumer level, showed that inflation increased by 0.4% in September, double the amount economists expected. On an annual basis, inflation declined from 8.3% to 8.2%, though this was also above estimates.

The real story here was Core CPI, which strips out volatile food and energy prices. It also came in higher than forecasted with a 0.6% rise. As a result, year over year Core CPI increased from 6.3% to a hotter than expected 6.6%.

The increase in prices last month was broad-based, with shelter, rent, food and medical care services costs all rising in September. While gasoline prices declined 4.9% in September, they are 18.2% higher than the same time last year.

However, when we look at how inflation is calculated, there is hope that it may start to move lower in the months ahead.

Inflation is calculated on a rolling 12-month basis, which means that the total of the past 12 monthly inflation readings will give us the year-over-year rate of inflation. For example, when the data for September 2022 was released last week, it replaced the data for September 2021 in the calculation of annual inflation. Going forward, the inflation readings that will be replaced are much higher, so if we see lower monthly readings this fall and next year, the annual rate of inflation would then move lower.

The Producer Price Index (PPI), which measures inflation on the wholesale level, rose 0.4% in September, coming in hotter than expectations. On a year-over-year basis, PPI decreased from 8.7% to 8.5%. While this moderated, it was also higher than anticipated. Core PPI, which strips out food and energy prices, was in line with estimates with a 0.3% increase. The annual figure declined from 7.3% to 7.2%.

What’s the bottom line? We still have not seen a meaningful decline in producer inflation. This can lead to hotter consumer inflation levels as producers have two options: reduce margins or pass along higher costs to consumers.

In addition, 30% of small business owners reported that inflation was their single most important problem in operating their business in September, per the National Federation of Independent Business Small Business Optimism Index. However, compensation and wages did moderate while owners expecting higher selling prices fell to the lowest level since September 2021. Both of these developments could signal moderating inflation in the months to come.

The minutes from the Fed’s September meeting were released last week and they showed that the Fed believes it needs to continue its tightening policy even as the labor market slows. The Fed acknowledged that inflation was declining more slowly than anticipated and “many participants emphasized that the cost of taking too little action to bring down inflation likely outweighed the cost of taking too much action.”

The hawkish tone to the minutes shows the Fed’s priority is taming inflation, even if it means economic growth, consumer spending and the labor market could be hindered.

Remember, the Fed has been under pressure since late last year to address soaring inflation, and in response they have hiked their benchmark Fed Funds Rate five times so far this year, including their latest aggressive 75 basis point hike at their meeting on September 21. The Fed Funds Rate is the interest rate for overnight borrowing for banks and it is not the same as mortgage rates. When the Fed hikes the Fed Funds Rate, they are trying to slow the economy and curb inflation. 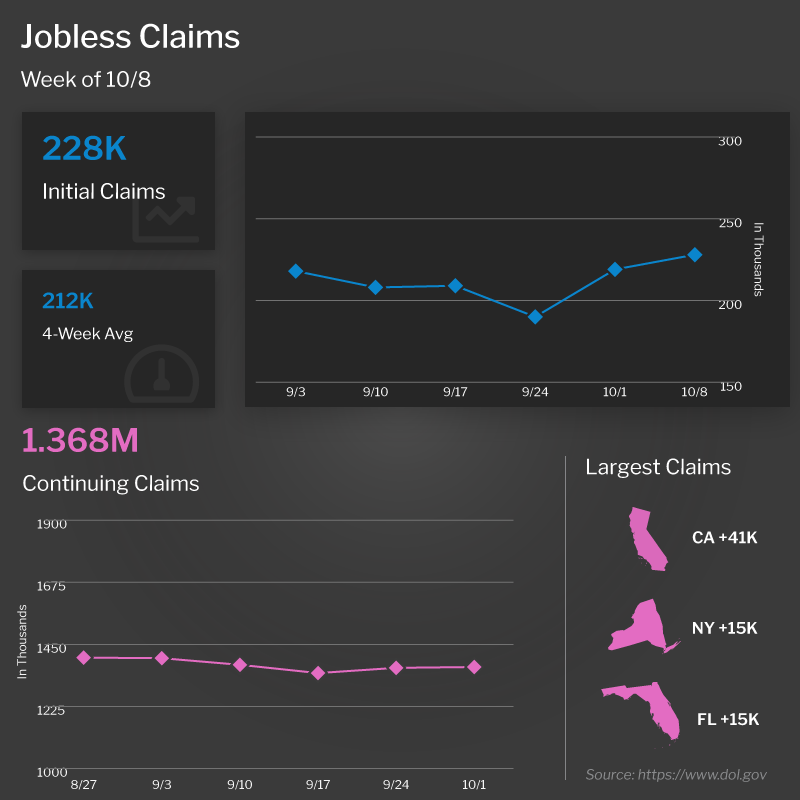 The number of people filing for unemployment benefits for the first time rose by 9,000 in the latest week, as 228,000 Initial Jobless Claims were reported. This followed a 29,000 increase in Initial Claims in the previous week. Continuing Claims, which measure people who continue to receive benefits after their initial claim is filed, were essentially unchanged, rising 3,000 to 1.368 million.

What’s the bottom line? Although the level of Initial Jobless Claims is still low, the increase in the last two weeks is significant and the trend in Initial Claims now appears to be higher. This report can be the “canary in the coal mine” to show that the job market is starting to soften, as an increase in the pace of firings is a precursor to a higher unemployment rate.

Halloween is nearly here! Enjoy an afternoon of carving pumpkins thanks to these handy tips from our friends at Good Housekeeping.

Start with a pumpkin that has a sturdy stem, no bruises and a flat bottom so it will stay in place once you start carving it.

Instead of cutting the lid at the top, cut it at the bottom. Not only can this help prevent the sides from caving in, but it will also be easier to place the pumpkin over candles or lights.

An ice cream scoop is a handy tool for removing pulp. Thin the area for the face to around 1 1/4-inches, so it will be easier to carve the eyes, nose and mouth.

Sketch your design on paper first, or download a template, and then trace your design onto the pumpkin to avoid any errant cuts. To keep your pumpkin fresh and moist, spread petroleum jelly on the edges.

Crucial housing reports will be released beginning Tuesday with the National Association of Home Builders Housing Market Index, which will give us a near real-time read on builder confidence for this month. Housing Starts and Building Permits for September follow on Wednesday, while September’s Existing Home Sales will be reported on Thursday.

The latest Jobless Claims numbers remain important to monitor when they are released as usual on Thursday. Plus, October’s manufacturing data for the New York and Philadelphia regions will provide important updates on that sector when it is reported on Monday and Thursday, respectively.