8:23 AM We are starting the week with Mortgage Bonds up 69 BP. (Price Up Yield Down) and the 10 year treasury is down 11 BP to 3.6980% after closing Friday at 3.804%. Our current Bias is Floating from last week's carefully floating Bias. Although we always need to be careful. So far so good.

Market Wrap - Mortgage Bonds Ended the day up 95 BP. (Price up Yield Down) and the 10 year treasury is now down 16 BP to 3.6430%. Not a bad day to start the first day in October after a tough September.

The Dow ended the day up 765 to 29490.89. Opec is meeting in Vienna on Wednesday to decide on their production policy. The are consider a dramitic cut in production of over 1 million barrels perday. Combined with the US stopping the deliveries of the Strategic Petrolium reserve and sanctions against Russia, we could again start bumping up against $100 a barrel. This is of course is not good for inflation.

Market Wrap Mortgage Bonds ended the day up 20 BP (Price Up Yield Down) off the highs slightly. 10 year ended the day at 3.635%. The dow was up 825.43. Tomorrow ADP and comes out and Friday the Non-Farm payrolls come out which will set the Bond Markets expections for the month.

Mortgage Rates are increasing today over inflation pressures due to OPEC cutting production of over $2,000,000 per day which equals about 2%  of the global dailey supply. Oil prices have risen 14% since last week.  For this reason we are moving our bias to Locking

In responce to the reduction of the OPEC cutting production, the US decided to extend the use of the Strategic Petrolium Reserve for another month. The current reserve inventoryis 416 million barrells. This is the lowest, since 1984.

Mortgage Bonds are down 36 BP (Price Down Yield Higher). The 10 year Treasury is up 5 BP to 3.813%. Current Bias remains locking in advance of tomorrow's Unemployment Report.

A word from Freddie Mac coming -

Mortgage rates decreased slightly this week due to ongoing economic uncertainty. However, rates remain quite high compared to just one year ago, meaning housing continues to be more expensive for potential homebuyers.

Market Wrap - Mortgage Bonds ended the day down 64 BP (Price Down Yield Higher). The 10 Year Treasury ended the day up 7 BP to 3.828%. Stay tuned to tomorrows Job's Report. See below

7:30 am Unemployment Figures The BLS Jobs report showed that there was an increase of 263,000 jobs in the month of September. The unemployment rate decreased from 3.7% to 3.5%. Average weekly earnings are up 0.3% for the month and 4.1% year over year. See below

There were some mixed messages from the labor sector while annual home price appreciation is slowing but still significant. Here are last week’s key stories: 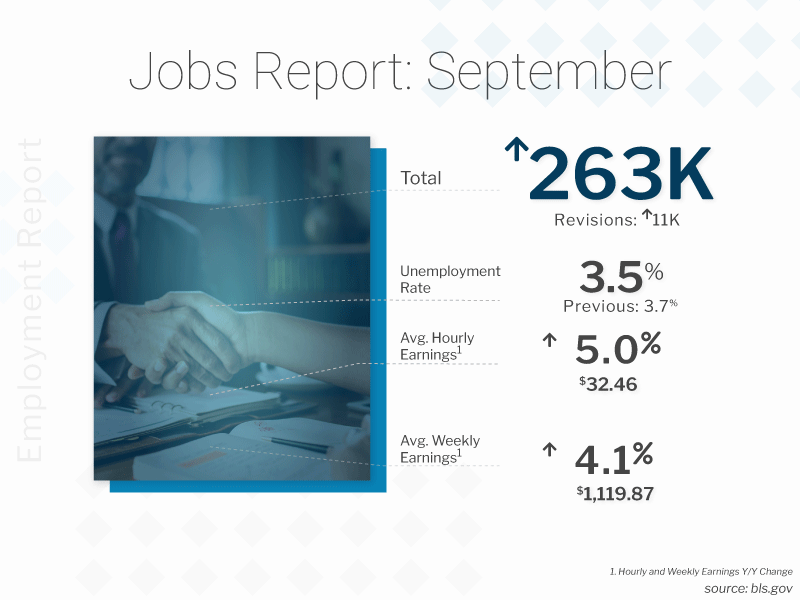 The Bureau of Labor Statistics (BLS) reported that there were 263,000 jobs created in September. This was just above expectations of 250,000 new jobs, but it was the smallest monthly gain in the last six months. There were also positive revisions to the data from July and August adding 11,000 jobs in those months combined. Almost all of the gains in September came from those 45 and older, while many of the other categories saw losses.

What’s the bottom line? The lower unemployment rate caused Stocks and Bonds to sell off on Friday because the data gives the Fed cover to continue hiking its benchmark Fed Funds Rate, which they have been doing to slow the economy and curb inflation. However, it’s important to look more closely at the data so we can understand why the unemployment rate declined.

There are two reports within the Jobs Report and there is a fundamental difference between them. The Business Survey is where the headline job number comes from and it's based predominately on modeling.

The Household Survey, where the Unemployment Rate comes from, is done by actual phone calls to 60,000 homes. The Household Survey also has a job loss or creation component, and it showed there were 204,000 job creations while the labor force decreased by 57,000. This drop in the labor force contributed to the decline in the unemployment rate, which means the decline wasn’t just due to strong job growth. 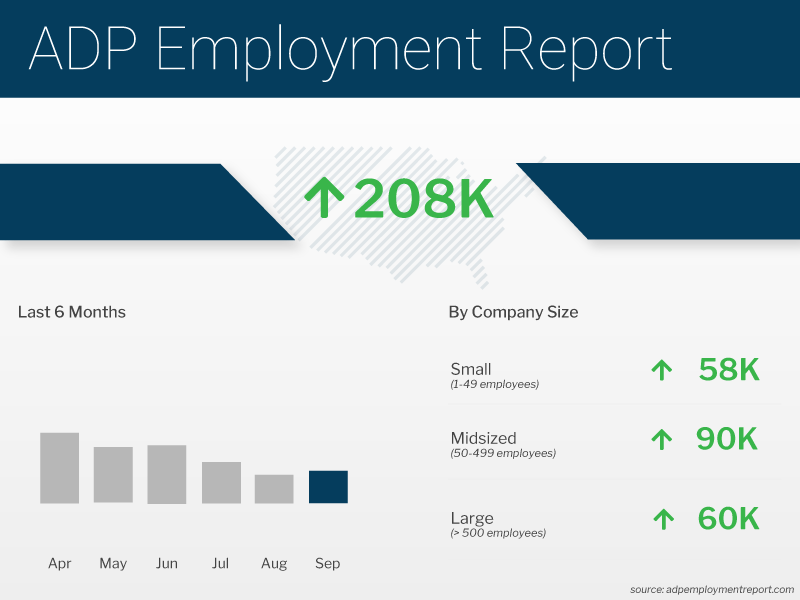 The ADP Employment Report, which measures private sector payrolls, showed that there were 208,000 jobs created in September. This was just above expectations and an increase from August, where job growth was revised higher from 132,000 to 185,000 new jobs.

ADP also reported that annual pay for job stayers was up 7.8% year over year, while job changers saw an average increase of 15.7%.

What’s the bottom line? While September’s data showed that job growth remained stable, it’s important to remember that these numbers are lagging. There are some other signs of stressors in the labor market, as noted below. 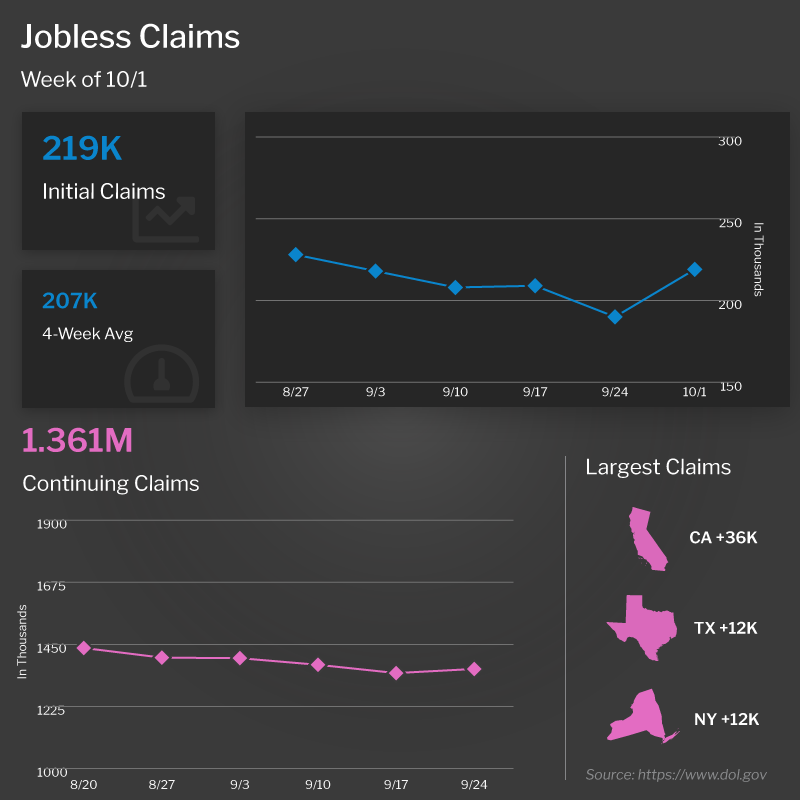 The number of people filing for unemployment benefits for the first time rose by 29,000 in the latest week, as 219,000 Initial Jobless Claims were reported. Continuing Claims, which measure people who continue to receive benefits after their initial claim is filed, also increased by 15,000 to 1.361 million.

What’s the bottom line? Although the level of Initial Jobless Claims is still low, the increase in the latest week was significant. Plus, it’s unclear how much this figure was impacted by Hurricane Ian. It could have been higher as many affected by the storm likely did not file claims, and it’s possible next week’s filings could increase as a result.

In addition, the Job Cuts Report from Challenger, Gray & Christmas showed that job cuts rose 46% from August to September. September also marked the fifth time in 2022 that cuts were higher this year than in the corresponding month last year. Senior Vice President Andrew Challenger said, “Some cracks are beginning to appear in the labor market. Hiring is slowing and downsizing events are beginning to occur.”

Lastly, KPMG Global released their CEO Outlook Survey, which asked 1,325 CEOs at the world's largest businesses about their strategies and outlook. The survey showed that 86% of CEOs anticipate a recession over the next 12 months, 39% have already implemented a hiring freeze and 46% are considering downsizing their workforce over the next six months.

CoreLogic released their Home Price Index report for August, showing that home prices declined by 0.7% from July but they were 13.5% higher when compared to August of last year. This annual reading declined from 15.8% in July but is still significant. More importantly, CoreLogic forecasts that home prices will stay flat from August to September and appreciate 3.2% in the year going forward.

What’s the bottom line? Remember that 3% appreciation can still be meaningful for wealth creation. For example, if someone bought a $400,000 home and put 10% down, that means they would gain $12,000 in appreciation over the next year and earn a 30% return on their investment due to leverage.

OPEC+ met last week and announced they will cut oil production by 2 million barrels per day, which is roughly 2% of global daily supply. This is not a good thing for oil prices and inflation and weighed on the markets last week. As a result, the U.S. decided to extend the use of the Strategic Petroleum Reserve for another month to help keep a lid on oil prices. The current inventory level is 416 million barrels, which is the lowest since 1984.

Fall is the perfect season for baking with apples, and these delicious Apple Strudel Muffins from Allrecipes are worthy of baking time and again.

Stir in 1 1/2 cups chopped apples to the sugar mixture, then gradually add flour mixture and blend together. Add batter to prepared muffin tin.

Bake for around 20 minutes, until a toothpick inserted in the center of a muffin comes out clean. Let sit for 5 minutes, then transfer to a wire rack to cool.

After the market closures Monday for Columbus Day, all eyes will be on inflation data for September when the Producer Price Index (which measures wholesale inflation) and the Consumer Price Index are reported on Wednesday and Thursday, respectively.

Other reports to note include the National Federation of Independent Business Small Business Optimism Index, which will show us how small business owners were feeling last month when it is reported on Tuesday. On Thursday, the latest Jobless Claims data will be reported while Friday brings September’s Retail Sales report.

The minutes from the Fed’s latest meeting will be released on Wednesday, which always have the potential to move the markets. Investors will also be closely watching Wednesday’s 10-year Note and Thursday’s 30-year Bond auctions for the level of demand.

Mortgage Bonds tested support at 97 on Friday but managed to bounce higher. The 10-year ended last week trading at around 3.88% and has some room to move higher until resistance at around 4.0%.