Last week’s inflation data had a big impact on Stocks, Mortgage Bonds and mortgage rates, while chatter of a global recession made headlines. Don’t miss these important details:

The Consumer Price Index (CPI), which measures inflation on the consumer level, showed that inflation increased by 0.1% in August. Although this is a low figure, it was larger than the -0.1% decline that was expected. On an annual basis, inflation declined from 8.5% to 8.3%, but again it was expected to drop even further to 8.1%.

The real headliner was Core CPI, which strips out volatile food and energy prices.

It rose by 0.6%, which was double the expected 0.3% increase. As a result, year over year Core CPI increased from 5.9% to 6.3%, which was also hotter than anticipated. Stocks and Mortgage Bonds fell sharply Tuesday as a result of this report, with the Dow having its worst day since June 2020.

Of note within the report, shelter costs increased by 0.7% in August, marking the highest increase since 1991. Rents rose 0.7% last month and are now up 6.7% year over year. Energy prices fell 5%, bringing the annual gain to almost 24%. Gasoline prices declined nearly 11% in August but they are up almost 26% year over year. Food costs climbed another 0.8% in August, bringing the year-over-year gain to 11.4%.

Regarding inflation at the wholesale level, the Producer Price Index fell 0.1% in August, which was in line with expectations. Year over year, PPI declined from 9.8% to 8.7%. Core PPI, which again strips out volatile food and energy prices, came in just above estimates with a 0.4% increase. The year over year figure fell from 7.6% to 7.3%.

To help cool inflation the Fed has been hiking its benchmark Fed Funds Rate, which is the interest rate for overnight borrowing for banks and it is not the same as mortgage rates. So far this year, we have seen 25, 50, 75 and 75 basis point hikes at their March, May, June and July meetings, respectively.

Recent news reports have indicated that the Fed is expected to hike the Fed Funds Rate another 75 basis points at its meeting this week, with the announcement coming this Wednesday. August’s hotter than expected consumer inflation readings have only increased this likelihood. 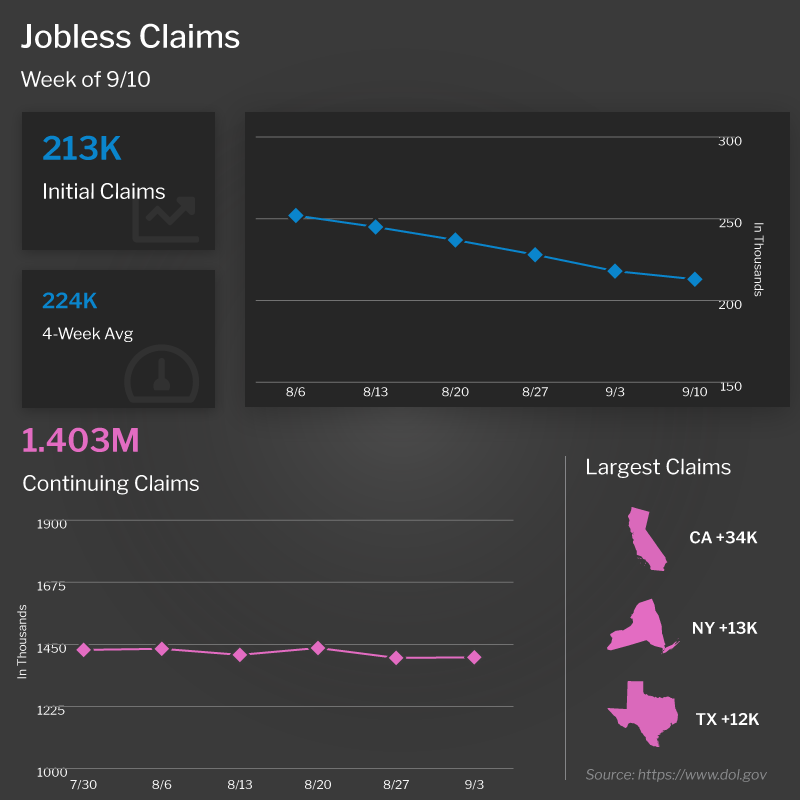 The number of people filing for unemployment benefits for the first time fell by 5,000 in the latest week, as 213,000 Initial Jobless Claims were reported. This marks the fifth consecutive week of declines and also the lowest level since late May. Continuing Claims, which measure people who continue to receive benefits after their initial claim is filed, increased by 2,000 to 1.403 million. However, this is after the previous week’s Continuing Claims was revised lower by more than 70,000.

What’s the bottom line? The 4-week average of Initial Jobless Claims had been rising steadily this spring and summer after reaching 170,500 on April 2. However, it has moderated slightly in recent weeks and now sits at 224,000 after the high of 249,500 on August 6. It appears that layoffs and in turn Initial Claims have slowed in recent weeks.

Retail Sales were up 0.3% in August, which was stronger than expectations of a 0.1% decline. However, this does not tell the whole story. When looking at Core Retail Sales, which removes things like automobiles, gasoline, building materials and food services, the reading for August was flat, coming in much lower than the 0.5% gain expected.

What’s the bottom line? The worse than expected Core Retail Sales figure is significant because it gets factored into GDP, and it could result in a negative revision to GDP estimates for the third quarter. GDP or Gross Domestic Product is a measure of economic activity and changes in this activity are a great way to measure the health of the economy.

While two consecutive quarters of negative GDP is not the official definition of recession, it became a Wall Street rule-of-thumb because we have never had successive quarterly declines in real GDP without the National Bureau of Economic Research (NBER) officially announcing one. The NBER will ultimately make the call regarding whether we’re in a recession here in the U.S. and they may wait to see some increases in the unemployment rate before doing so.

Meanwhile, both the World Bank and FedEx CEO Raj Subramaniam made headlines last week by saying they believe the world is edging toward a global recession. Typically, when you see recessions, roughly 50% of the globe participates. Often the countries who are not experiencing a recession may be able to help the countries in a recession pull out of it. But if it’s highly synchronized like many are predicting, who is going to pull us out? This can lead to deeper and longer recessions.

Last Thursday, the White House announced that a tentative deal was in place to avoid a railway strike that would have started on Friday. Given our already strained supply chains and persistently high inflation, this was a critical resolution to the situation, as the estimated cost to the economy of this strike was $2 billion per day.

Whether you’re looking for a healthy grab and go breakfast or an afternoon treat, these Fruit and Nut Bars courtesy of Woman’s Day are delicious and easy to make.

Line an 8-inch square pan with nonstick foil, leaving some overhang on all sides.

In a food processor, chop 1 cup dates and transfer to a bowl. In a small saucepan over medium heat, melt 1/4 cup peanut or almond butter, 1/4 cup honey and 1 teaspoon pure vanilla extract, stirring occasionally until combined (approximately 1 minute). Add to bowl with dates and mix to combine.

Press the mixture into the pan and freeze until sliceable, around 30 minutes. Cut into 12 bars, which can be stored in the refrigerator for several days.

Key housing reports are ahead this week, beginning Monday with the National Association of Home Builders Housing Market Index, which will give us a near real-time read on builder confidence for this month. On Tuesday, Housing Starts and Building Permits for August will be reported, while August’s Existing Home Sales follows on Wednesday.

Also of note, the latest Jobless Claims will be reported as usual on Thursday.

But the biggest news will be the Fed’s two-day meeting beginning Tuesday, with the Monetary Policy Statement and press conference coming on Wednesday. As noted above, the Fed is expected to again hike its benchmark Fed Funds Rate to help cool inflation. Investors will be closely watching their actions and commentary.

Mortgage Bonds improved throughout the day on Friday, ending the week trying to remain above the low of 99.375 from Tuesday as well as a longer-term trend line from April. Bonds are deeply oversold from a momentum standpoint, and with this week’s upcoming Fed rate hike, we could see a relief rally and reversal higher.