Currently Rates are going up.  The 10 year is up 11 bp. For current conditions go to: John's Blog Page

Thinking about Refinancing now or in the future? Check out:

Important labor sector reports made headlines ahead of the Labor Day holiday, while home prices continue to rise. Don’t miss these key stories:

-Home Prices Continue to Rise, Albeit at a Slower Pace 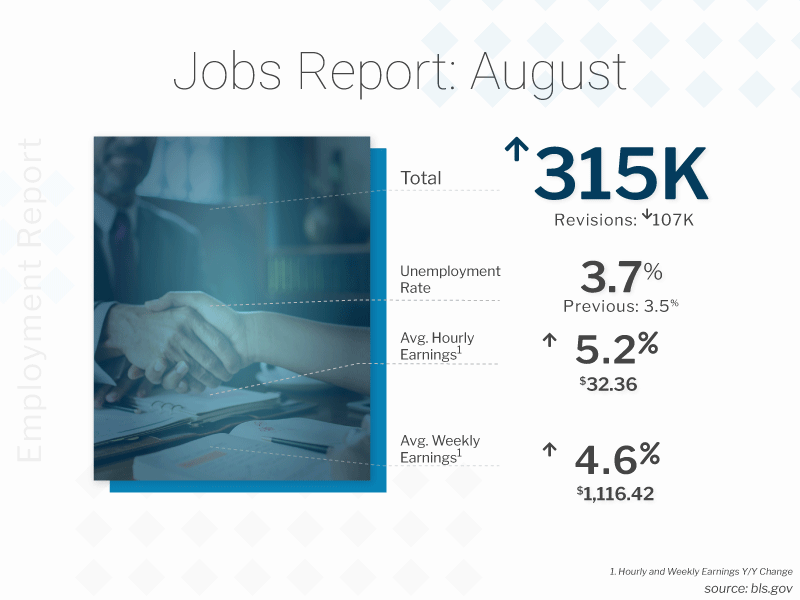 The Bureau of Labor Statistics (BLS) reported that there were 315,000 jobs created in August, coming in just above expectations of 300,000 new jobs. However, there were negative revisions to the data for June and July subtracting 107,000 jobs in those months combined. The Unemployment Rate rose from 3.5% to 3.7%, though this is partially due to the rise in the labor force, which increased by 786,000.

Note that the headline unemployment rate removes people who are not actively searching for a job and there were almost 6 million people that are not being counted who “want a job” but have not looked in the last four weeks. The U-6 all-in unemployment rate, which adds back all these individuals and is more indicative of the true unemployment rate, increased to 7.0%.

What’s the bottom line? It’s important to understand that there are two reports within the Jobs Report and there is a fundamental difference between them.

While this large amount of job creations seems strong on the surface, a closer look shows that 82% or 363,000 of those jobs were among people 16 to 19 years old. In other words, the bulk of these jobs represent entry level positions and don’t typically reflect sizable incomes that will lead to big spending in the economy. 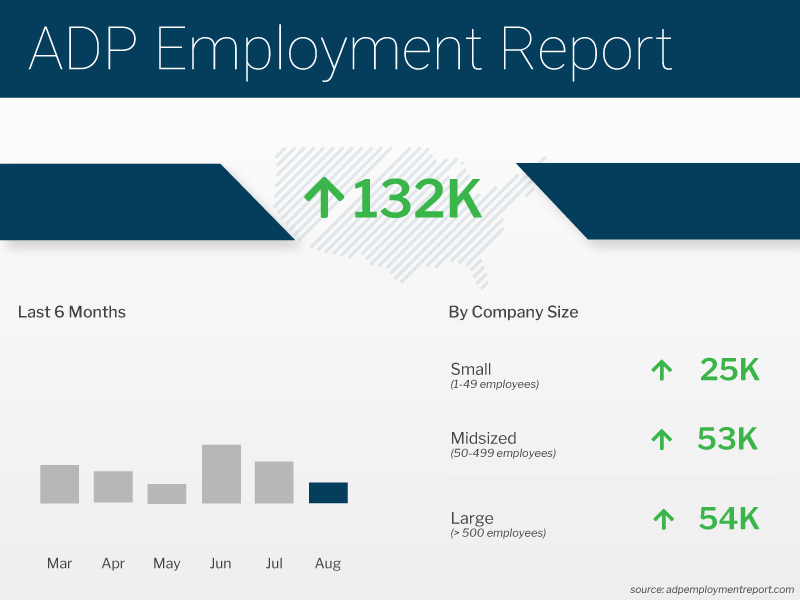 The ADP Employment Report, which measures private sector payrolls, showed that there were only 132,000 jobs created in August. This was about half of the amount expected and down from 268,000 new jobs in July and 380,000 in June.

ADP also reported that annual pay for job stayers was up 7.6% year over year, while job changers saw an average increase of 16.1%. While the pace of pay increases is elevated, it has also stabilized.

Note that ADP paused this report earlier in the summer to retool their methodology with the goal of making it more accurate. Instead of using modeling, they are now compiling this report by using actual payroll data from over 25 million employees.

What’s the bottom line? The data released last week for June, July and August clearly shows that the trend is a slowing jobs market. Nela Richardson, chief economist for ADP, said, “Our data suggests a shift toward a more conservative pace of hiring, possibly as companies try to decipher the economy's conflicting signals. We could be at an inflection point, from supercharged job gains to something more normal.” 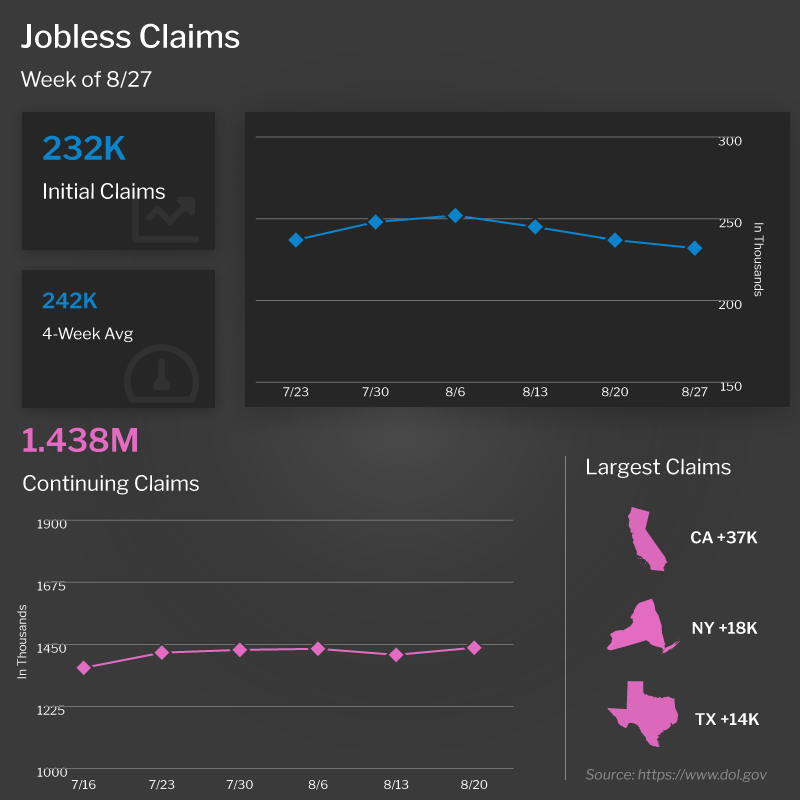 Initial Jobless Claims decreased by 5,000 in the latest week, as 232,000 people filed for unemployment benefits for the first time. The previous week’s Initial Jobless Claims were also revised lower by 6,000. Continuing Claims, which measure people who continue to receive benefits after their initial claim is filed, increased by 26,000 to 1.438 million, the highest level since April.

What’s the bottom line? The 4-week average of Initial Jobless Claims had been rising steadily this spring and summer after reaching 172,000 on April 2. However, it has moderated slightly in recent weeks and now sits at 242,000 after the high of 250,000 on August 6. Some of this moderation may be because many recent layoffs have come in the tech space, and these very skilled workers have easily found new jobs and have not needed to file for claims.

That being said, this report can be the “canary in the coal mine” to show that the job market is starting to soften, though it is a lagging indicator. Given the announcements of significant layoffs from several public companies, it remains crucial to monitor whether Initial Jobless Claims will continue to moderate or if they start to increase again in the weeks ahead.

Home Prices Continue to Rise, Albeit at a Slower Pace 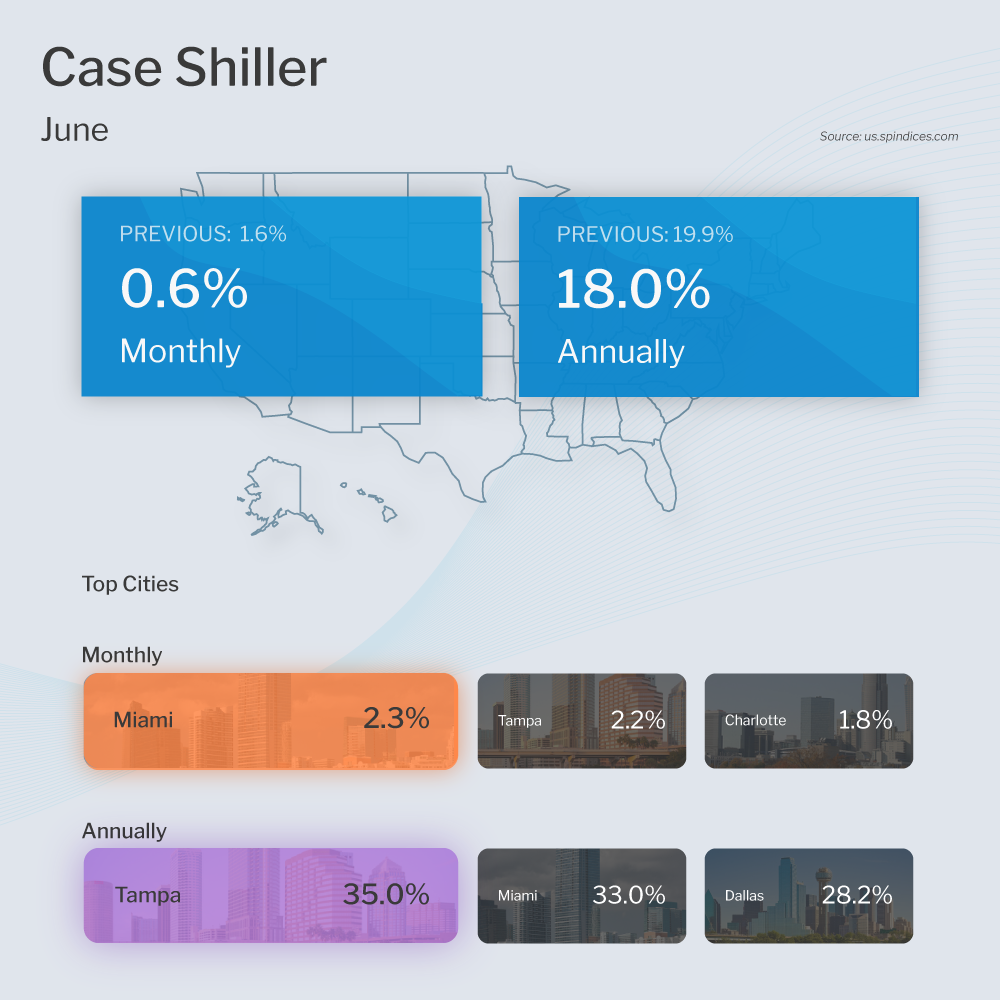 The Case-Shiller Home Price Index, which is considered the “gold standard” for appreciation, showed home prices rose 0.6% in June and 18% year over year. This annual reading is a decline from the 19.9% gain reported in May but still strong.

The Federal Housing Finance Agency (FHFA) also released their House Price Index. This report measures home price appreciation on single-family homes with conforming loan amounts, which means it most likely represents lower-priced homes. Home prices rose 0.1% in June and 16.2% year over year. This is a decline from the 18.3% increase reported in May, but again still very hot on an annual basis.

What’s the bottom line? Appreciation is clearly slowing, but as of June home prices were still increasing at a robust rate.

“Prices are clearly increasing at a slower rate, said Craig Lazzara, Managing Director at S&P Dow Jones Indices. “It’s important to bear in mind that deceleration and decline are two entirely different things, and that prices are still rising at a robust clip. June’s growth rates for all three composites are at or above the 95th percentile of historical experience. For the first six months of 2022, in fact, the National Composite is up 10.6%. In the last 35 years, only four complete years have witnessed increases that large.”

Football season is here. Kick off game day in delicious fashion with this Guacamole recipe courtesy of the Food Network.

Soak 1/4 minced red onion in cold water for 15 minutes. Drain and transfer to a large bowl. On a cutting board, sprinkle 2 cloves of garlic with Kosher salt and smash into a paste. Add to the bowl with the onion. Scoop out two ripe avocados and add to bowl, then add juice of one lime, 2 to 3 tablespoons of roughly chopped cilantro, 1 plum tomato (cored and diced) and 1/4 minced jalapeno pepper.

Mix until just combined so guacamole stays chunky, season with salt to taste and enjoy with your favorite chips.

After the market closures Monday for Labor Day, the economic calendar is relatively quiet for the week ahead. Jobless Claims remain crucial to monitor when they are released on Thursday because the Fed will be watching employment data closely as they determine how to best fight inflation.

Mortgage Bonds moved sharply higher off of support at 99.0 following Friday’s BLS Jobs Report. The 10-year has fallen below the pivotal 3.25% level and ended last week trading at around 3.20%.