-What’s Ahead for Jobless Claims?

The Fed’s favorite measure of inflation, Personal Consumption Expenditures (PCE), showed that inflation fell 0.1% in July, which was in line with expectations. The year over year reading declined from 6.8% to 6.3%. Core PCE, which strips out volatile food and energy prices, rose by 0.1% with the year over year change declining from 4.8% to 4.6%.

What’s the bottom line? During his speech last week at Jackson Hole, Fed Chair Jerome Powell confirmed that the Fed would continue “using our tools forcefully” to attack inflation, which remains near 40-year highs and well above their target range.

To help cool inflation, the Fed has been hiking its benchmark Fed Funds Rate, which is the interest rate for overnight borrowing for banks and it is not the same as mortgage rates. So far this year, we have seen 25, 50, 75 and 75 basis point hikes at the Fed’s March, May, June and July meetings, respectively. Counterintuitively, Fed rate hikes can be good for mortgage rates if they’re perceived to curb inflation.

The Fed will be closely watching upcoming economic reports ahead of its meeting on September 20-21, as these will play an important role in their decision regarding the size of their next rate hike. 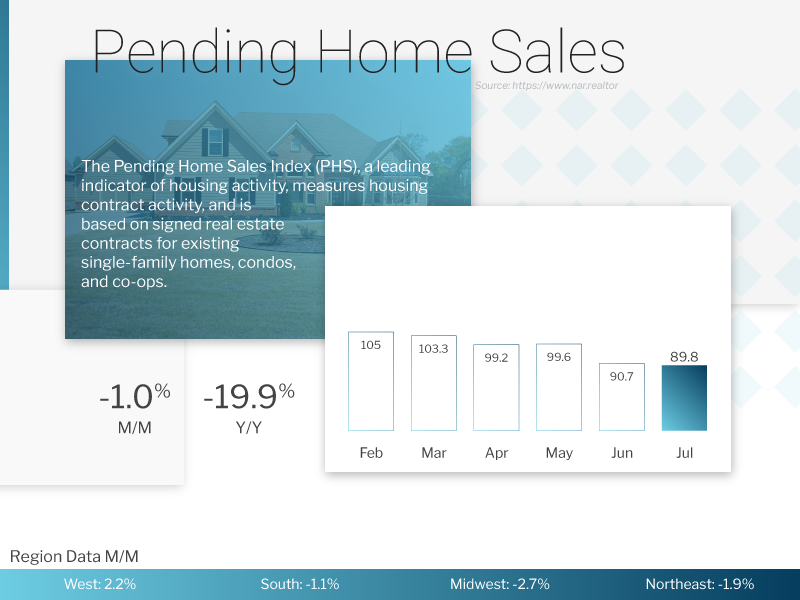 Pending Home Sales fell 1% from June to July, though this was better than the 3% drop that was expected. Sales were also nearly 20% lower than they were in July of last year. This is a critical report for taking the pulse of the housing market, as it measures signed contracts on existing homes, which represent around 90% of the market.

Given the time it can take to find the right home, July’s data likely reflects buyers who were house hunting in June before finding a home and signing a contract in July. Mid-June is when rates peaked earlier this year, which is why a larger decline in signed contracts was expected in July’s report.

What’s the bottom line? Lawrence Yun, chief economist for the National Association of Realtors, said he believes we “may be at or close to the bottom in contract signings,” noting that July’s modest decline reflects the “recent retreat in mortgage rates.” He added that, “Home prices are still rising by double-digit percentages year-over-year, but annual price appreciation should moderate to the typical rate of 5% by the end of this year and into 2023.”

Lower appreciation is very different from home price declines and is still very beneficial for wealth creation. For example, if someone bought a $400,000 home and put 10% down, 5% appreciation means they would gain $20,000 in appreciation over the next year and earn a 50% return on their investment due to leverage. 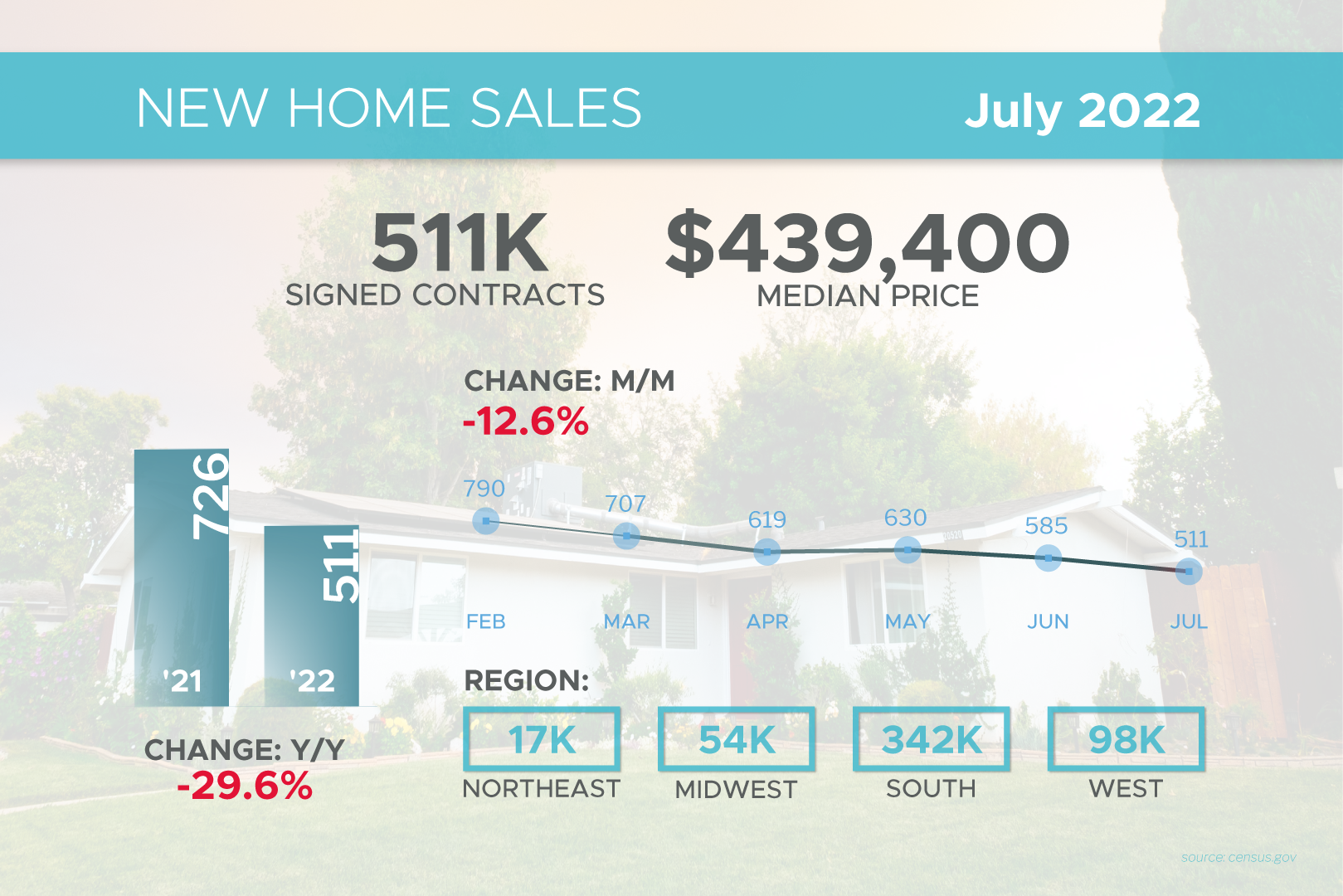 New Home Sales, which measure signed contracts on new homes, declined 12.6% from June to July to a 511,000-unit annualized pace, coming in much worse than expected. Sales were also nearly 30% lower than July of last year. The median price for new homes was $439,400 but remember, this is not the same as appreciation. It simply means half the homes sold were above that price and half were below it.

What’s the bottom line? There is no doubt that higher interest rates have impacted demand for homes, but low inventory continues to be a factor as well. Remember, a 6 months’ supply of homes is considered representative of a balanced market. And while there were 464,000 new homes available for sale at the end of July, which equates to a 10.9 months’ supply, there’s more to this data than meets the eye.

Only 45,000 or less than 10% of the available homes were actually completed, while 23% had not even been started and 67% were still under construction. When factoring in the amount of completed homes, the month’s supply of new homes available was closer to one month, well below what’s considered balanced. On a related note, data released earlier this month from the National Association of Realtors showed that the amount of existing homes at the end of July was also below a balanced level, with just a 3.3 months’ supply available.

While we are clearly seeing an activity recession in housing, low inventory should continue to be supportive of home prices.

What’s Ahead for Jobless Claims? 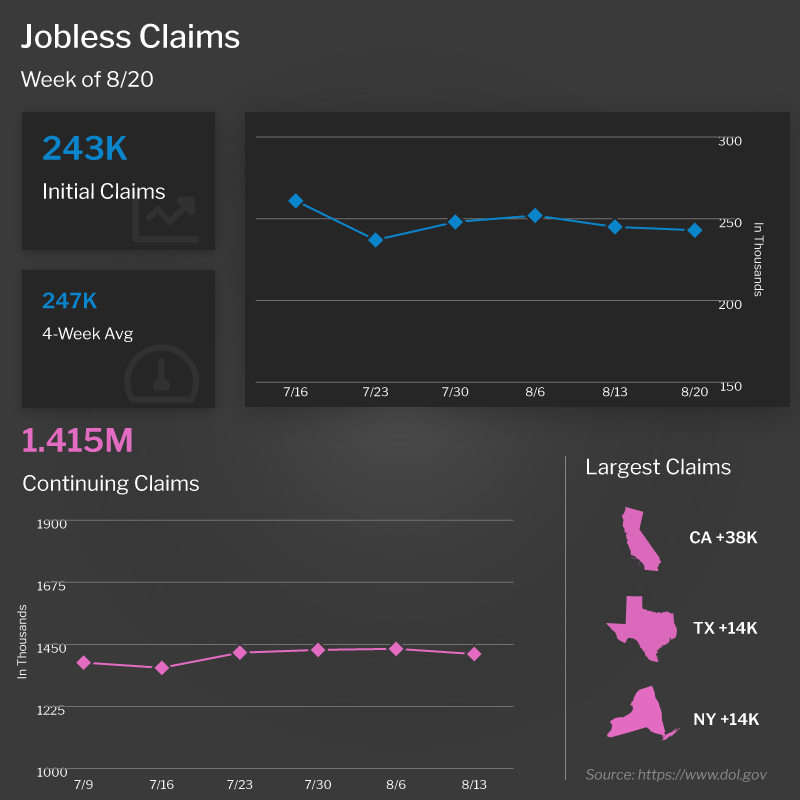 The number of people filing for unemployment benefits for the first time fell by 2,000 in the latest week, as there were 243,000 Initial Jobless Claims reported. The previous week’s Initial Jobless Claims were also revised lower by 5,000. Continuing Claims, which measure people who continue to receive benefits after their initial claim is filed, decreased 19,000 to 1.415 million.

What’s the bottom line? The 4-week average of Initial Jobless Claims has remained steady in recent weeks after hitting highs not seen since late last year. This report can be the “canary in the coal mine” to show that the job market is starting to soften, but it is a lagging indicator. Given the announcements of significant layoffs from several public companies, it remains crucial to monitor whether claims increase in the weeks ahead.

The second estimate of second quarter GDP came in at -0.6%, which was unexpectedly better than the advanced estimate of -0.9% that was reported last month. Note that second quarter GDP may be revised once again when the final reading is reported on September 29. But as of now, we still have two consecutive quarters of negative GDP, given that the final reading for the first quarter was -1.6%.

What’s the bottom line? While two consecutive quarters of negative GDP is not the official definition of recession, it became a Wall Street rule-of-thumb because we have never had successive quarterly declines in real GDP without the National Bureau of Economic Research (NBER) officially announcing one. The NBER will ultimately make the call regarding whether we’re in a recession and they may wait to see some increases in the unemployment rate before doing so.

Keeping an emergency kit in your car is crucial, whether you’re driving around town or hitting the road for Labor Day weekend. These tips from Ready.gov can help ensure you have everything you need.

For your basic car kit, include jumper cables, flares or a reflective triangle, cell phone chargers, ice scraper, flashlights, and blankets or sleeping bags. Test the flashlight batteries regularly but keep extras in your kit as well. A whistle can also be useful in case you ever need to signal for help while a basic first-aid kit is always good to have handy. Cat litter or sand can also be helpful for tire traction.

For longer road trips, bring a paper map in case cell service or sat navigation is unavailable. Pack enough water so you have one gallon per person per day as well as several days of non-perishable food. Be sure to bring a can opener, paper towels or napkins, trash bags, plastic utensils, moist towelettes and hand sanitizer.

Books, games or other activities for kids can also come in handy during traffic delays or longer times on the road.

On Wednesday, ADP’s new Employment Report will give us an update on private payrolls while the latest Jobless Claims data will be reported on Thursday. Friday brings the Bureau of Labor Statistics Jobs Report for August, which includes Non-farm Payrolls and the Unemployment Rate.

Mortgage Bonds continue to trade in a wide range between support at 99.28 and overhead resistance at the 50-day Moving Average, so it’s important to be on guard for price swings. The 10-year is currently trading in a tight range, with 3.10% as a ceiling and the psychological 3.0% level as a floor.

Or call me and I can fill it out over the phone.