When you see the dog floating this means rates at that moment are improving compared to our latest rate sheet.  If you see a lock on a house, this means at that moment rates are likely to go up compared to our latest rate sheet.  This is not a prediction of the future.  It is a prediction of the likely change in our current rates using current market conditions.

-Consumer and Producer Inflation Cooler Than Expected in July

Consumer and Producer Inflation Cooler Than Expected in July

The Consumer Price Index (CPI), which measures inflation on the consumer level, showed that inflation was flat in July. This was lower than the 0.2% increase that was expected. Note that a flat or 0.0% reading doesn’t mean inflation fell in July, but rather there was no increase in inflation in July from June. On an annual basis, inflation declined from 9.1% to 8.5%, also lower than estimates. Core CPI, which strips out volatile food and energy prices, also came in below estimates.

Of note within the report, rents rose 0.7% last month and are now up 6.3% year over year. While this data has started to increase, the CPI report is still not capturing the double-digit year over year rent increases other rent reports like Apartment List and CoreLogic are showing. Energy prices fell 4.6%, bringing the annual gain to nearly 33%. Gasoline prices declined 7.7% in July but they are up 44% year over year. Food costs climbed another 1.1% in July, bringing the year-over-year gain to almost 11%.

The Producer Price Index (PPI), which measures wholesale inflation, also fell 0.5% in July, coming in much lower than the 0.2% gain expected. The drop in gasoline prices accounted for much of the decline in this headline reading. On a year over year basis, PPI declined from 11.3% to 9.8%. Core PPI, which again strips out volatile food and energy prices, came in below estimates with a 0.2% increase. The year over year figure fell from 8.2% to 7.6%.

What’s the bottom line? To help cool inflation the Fed has been hiking its benchmark Fed Funds Rate, which is the interest rate for overnight borrowing for banks and it is not the same as mortgage rates. So far this year, we have seen 25, 50, 75 and 75 basis point hikes at their March, May, June and July meetings, respectively.

July’s cooler than expected inflation readings mean the markets are now betting that the Fed may hike the Fed Funds Rate by 50 basis points rather than 75 at their meeting on September 21. The Fed will be closely watching August’s inflation and employment reports when they’re released in early September ahead of its meeting, as these will also play an important role in their decision.

Import prices were down 1.4% last month, which is the first decline since December and another sign that inflation is at least starting to subside a bit. A big reason for this is how strong the dollar is comparatively to other currencies. Because of the strength in the dollar, we are importing less inflation.

So, why is the dollar strong compared to other currencies?

The Fed has had the first jump on hiking rates, and they have done more hikes than many other countries so far. However, it’s unclear how long this will last, as other central banks are beginning to catch up and do more rate hikes.

The National Federation of Independent Business Small Business Optimism Index was reported at 89.9 for July, up a touch from the 89.5 print seen in June that was the lowest since January 2013. Among the takeaways, 37% of small business owners reported that inflation remained their top problem. This is the highest level since 1979, so July’s cooler than expected inflation readings could be welcome news. 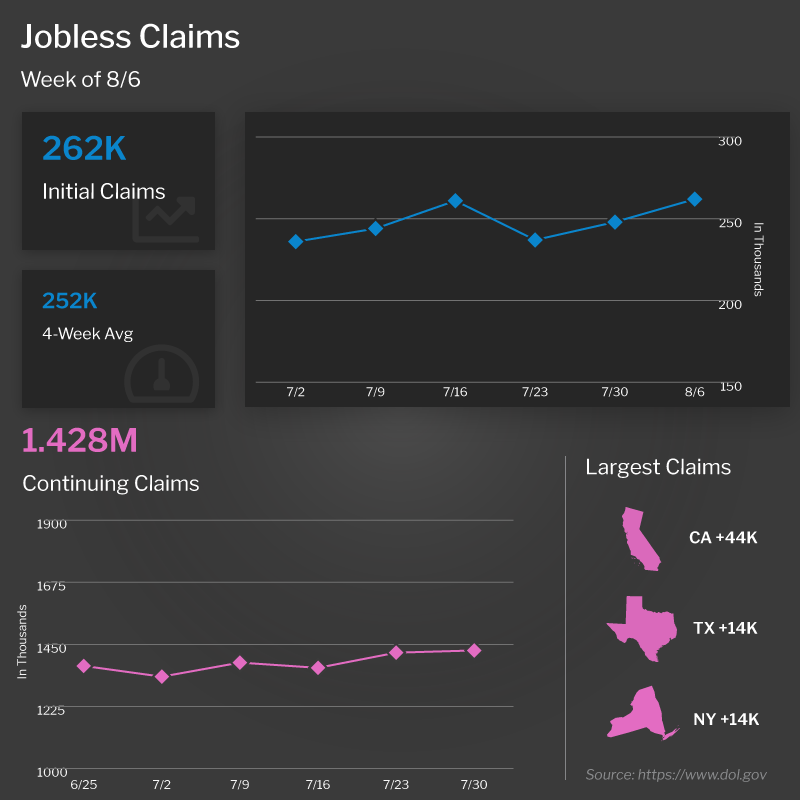 Initial Jobless Claims increased by 14,000 in the latest week, as 262,000 people filed for unemployment benefits for the first time. However, the number of Initial Claims filed in the prior week was revised lower by 12,000, which tempers some of the latest increase. Continuing Claims, which measure people who continue to receive benefits after their initial claim is filed, rose 8,000 to 1.428 million, reaching a high not seen since the beginning of April.

What’s the bottom line? The 4-week average of Initial Jobless Claims moved up once again to its highest level since late November. The trajectory higher is likely to continue, given the announcements of significant layoffs from several public companies, which means we will eventually see a higher unemployment rate. This report can be the “canary in the coal mine” to show that the job market is starting to soften.

Back to school season is in full swing. These hacks courtesy of Parenting.com can help you save time and stay organized all year long.

Create a homework station complete with pencils, paper, folders, erasers, highlighters, calculators and more supplies your kids will need for assignments in the year ahead. This can minimize clutter throughout your home as well as save time by preventing hunts through the house for needed items.

Snack stations can also save time after school as well as when packing lunches. Add perishable snacks like grapes or carrots into sealable plastic bags and keep them in a specific drawer in your fridge, along with cheese sticks and yogurts. You can also create a snack station for pantry items where you can keep single-serving bags of pretzels, juice boxes, granola bars or cookies.

DIY cereal stations for kids are great for making mornings easier. Prefill plastic containers with your kids’ favorite cereal, fill a jug with a spigot with milk and keep spoons in an easy to reach place so they can grab their own breakfast each day.

Housing news dominates the headlines this week, beginning Monday with the National Association of Home Builders Housing Market Index, which will give us a near real-time read on builder confidence for this month. On Tuesday, Housing Starts and Building Permits for July will be released. July’s Existing Home Sales follows on Thursday.

Over in the manufacturing sector, August’s data for the New York and Philadelphia regions will be reported on Monday and Thursday, respectively. July’s Retail Sales data will be released on Wednesday, while the latest Jobless Claims follows as usual on Thursday. It will be important to see if these reports show more signs that the economy is slowing.

Mortgage Bonds are continuing to trade in a narrow range between support at the 25-day Moving Average and overhead resistance at the 100-day Moving Average. Going back to mid-June, Bonds have created a pennant formation, which is narrowing and squeezing Bonds. Oftentimes, Bonds will break out of these types of patterns in the direction of the previous trend, which was higher. The 10-year is in a similar position but reversed since we are looking at the yield.